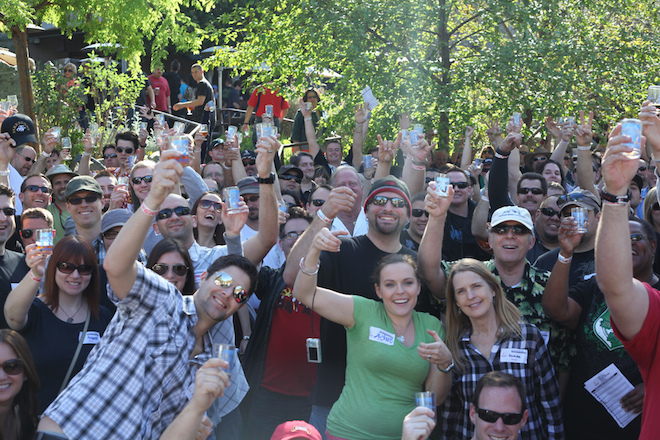 Because outdoor beer fests are the best way to enjoy SoCal’s awesome weather AND our amazing local breweries—I can’t think of a better way to spend a Sunday!—here are four that you don’t want to miss:

Stone AHA Rally & Homebrew Competition — Escondido, March 15
This one requires a little bit of a drive since it’s in North County San Diego, but it’s a great annual event that I always enjoy attending. Thirty homebrewed beers are available to taste. The winning entry gets scaled up and made in Stone Brewing Co.’s humongous brewhouse. Then, it’s released in bottles and on draft, which is pretty damn neat if you’re a homebrewer! The $38 entry fee goes directly to the American Homebrewers Association (to which attendees receive a one-year membership), lets you sample these homebrews and vote for your favorites, and you get to keep the souvenir glass. More information.

Firkfest — Anaheim, March 22
Down south in the O.C., a craft beer and food festival is coming that celebrates the firkin, a keg-like vessel that houses what’s known as “cask ale” or “real ale.” Thirty SoCal breweries will be pouring their own cask ale that’s been conditioned and allowed to ferment in the firkin, remaining unfiltered, unpasteurized, and less carbonated than most packaged beer. The other benefit is that these brewers can add all kinds of spices, herbs, and hops into the firkin to augment the base beer, so many of these creations won’t be around ever again. More information.

“One of Sam’s favorite things to do each year was to attend the Toronado Barleywine Fest up in San Francisco. Up until he got to ill to attend, he would make the trek to the Bay Area to try all the strong, malty beers they had to offer. […] 38 Degrees Ale House had scheduled the first ever Los Angeles Barleywine Festival for March 2014, and when we learned of Sam’s passing last month, we decided it would only be right to dedicate this festival to our friend Sam, and dub this barleywine based event ‘Sam Fest.’”

There is no cover to attend and the 30 beers that will be available can be purchased à la carte. (Do exercise caution, as barleywines tend to be relatively high in alcohol.) More information.

L.A. Vegan Beer & Food Fest — West Hollywood, May 17
This has to be one of my favorite beer festivals, and I’m not just saying that because of my veggie persuasion. This will be the fifth installment of the fest, put on by Tony Yanow of Tony’s Darts Away, Mohawk Bend, and Golden Road Brewing, vegan blogger extraordinaire Quarry Girl, and Nic Adler of The Roxy.

“Wait… isn’t all beer vegan?” Not necessarily. Most is, sure, since the base ingredients—water, malted barley, hops, and yeast—are all obviously free of meat and animal by-products, but some brewers do use gelatin or isinglass (made from the swim bladders of fish) to help clarify their beers. Additionally, there are some beers that use honey, and certain beer styles, like milk stouts, that—as the name implies—utilize lactose for body and sweetness.

More than 30 breweries and food vendors will be peddling their vegan wares for your enjoyment (yes, unlimited beer!) along with live music and sunshine. True, this event’s not happening for a while, but tickets are on sale already, and it always sells out, so I wanted to make sure you knew about it before it was too late. I live to serve. More information.