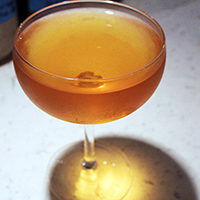 When hospitality company Proprietors LLC (Honeycut, DBA) partnered up with Acme Bar Group on King Eddy Saloon a couple of months ago, the subject of who was going to do the cocktail program for the bar group’s newest downtown project, Beelman’s Pub, came up. Of course Proprietors’ Alex Day, David Kaplan, and Devon Tarby wanted at it. “It’s a cool spot. Spring Street. Converting an old coffee bar into a kickass place for indoor and outdoor drinking? Yes please,” said Day. “It’s a European-tilted program which could not be more up our collective alley.”

But this isn’t high-falutin’, white tablecloth Europe. Rather, Beelman’s Pub will fit into the neighborhood vibe of Spring Street as it emulates the low-key corner pub where the European Everyman frequents on a daily basis. “It’s the blue collar Europe. This is a large representation of the continent and it’s kind of a large celebration of that in very much an American way,” said Day.

The bar program spotlights old world liqueurs, amari and apertifs but presents them in an approachable way, via seven classic cocktails, like a Manhattan variation made with armagnac rather than rye and a Negroni with an amaro that’s less polarizing than Campari. The results are highly quaffable, food-friendly cocktails.

“There’s nothing too aggressive. Even the stirred cocktails are pretty nuanced enough that you can pair them with food easily,” said Tarby. “Aged spirits abroad don’t have that same kind of intensity as American whiskey. A Manhattan with rye may not be the best thing with food but we make ours with armagnac so it’s a little softer.”

Other cocktail highlights on the program include gin and tonic two ways–Spanish-style (cracked ice with herbs in a goblet) or the more familiar English-style–and three cocktails on tap (two sparkling, one still). However, the mixmasters didn’t want to make a big deal about that whole cocktails-on-tap trend. “We didn’t separate the draft cocktails from the others on the menu because we didn’t want it to be this kitschy thing,” explained Tarby. “We put things on draft that were better prepared on draft. So aperitif-style cocktails where carbonating the whole thing instead of just adding club soda just gives it a better end result.”

The carbonated cocktails are “like popping open a soda, it’s that same texture with all these gorgeous floral, crisp flavors,” said Tarby. In addition to providing a fun texture, carbonating cocktails keeps them fresh. “The verjus (used in the Cobbler Collins draft cocktail) is a very unstable thing. When you open it up it deteriorates like that. So as we’re combining this into a large batch, we’re carbonating the whole thing, we’re removing the oxygen, we’re preserving everything so it’s as fresh as it possibly can be,” said Day. They’re also using nitrogen to help dispense cocktails (at a slightly lower pressure than what would be found on a Guinness tap), which lends a slight creaminess to the draft Negroni. “It broadens up the blanc vermouth and especially the Calvados in there and it has this really nice, subtle velvety feel to it,” adds Day.

Those thirsty for other drinking options will find satisfaction in the pub’s expansive European beer list as well as unique old world wines at varying price tiers–$9 to $12 a glass, a two-glass carafe, and by the bottle. “We sat down with a lot of importers and distributors and our goal was to find varietals that are well understood but find unique expressions of them,” said Tarby. As in the case of the Rioja, “you think of it as this big, Bordeaux-style red that’s super rich but this one is a different expression. It’s that middle-of-the-road, medium body red,” said Day.

The team is hoping that even with the European focus and “high-brow ingredients,” Beelman’s Pub will be one of those bars on Spring Street that people frequent many times a week. “You don’t have to feel fancy necessarily. You can drink Calvados and not have your pinky up. Necessarily. That’s a personal choice,” said Tarby.

Beelman’s Pub is slated to open on June 9th.