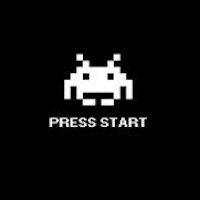 1982 is often thought to be the golden age of the arcade. Well before we could play games on our cell phones, we went to darkened shops where the only light came from the glow of a screen and you could barely hear your friends’ chatter beneath the sound of electronic rockets, lasers, and other miscellaneous bleeps and bings and bops.

It was also in 1982 that residents first began setting up live-work lofts in what is now known as downtown L.A.’s arts district. And so this is where owners Scott Davids and Noah Sutcliffe—who have been best friends since the age of five—decided to open EightyTwo, an arcade and cocktail bar.

The space, designed by architect Darin Johnstone, was first built as a gas station in the late ’70s. It was most recently a manga comic book store and an accountant’s office. Johnstone collected and divided the buildings around a central courtyard, and tore through the original drywall and tile to reach the bare cement walls and floors. The main space is a classic video game arcade that juts up against a long bar and DJ booth. On the other side of the tree-filled courtyard is the pinball room. Tables and chairs are scattered about the otherwise plain rooms.

When I asked Davids where the games came from, his eyes lit up when he responded, “They’re mine. I collect them, I’ve been collecting them for years. Most of these used to be in my home.” It’s quite a collection. Several dozen stand around each room, and there are several dozen more in the back  where a technician fixes broken machines. “We didn’t just want to have an arcade,” says Davids, “we live and work in the neighborhood so we wanted a place where we could get a good drink too.” So they brought in bartender Billy Ray, who owns the cocktail consulting company named for a NOFX album, 13 Stitches. Ray created a list of 12 drinks; each is priced at $12.

Highlights on the list include The n00b, made with bee pollen, local honey, house-made lemongrass syrup, lemon juice, and vodka. The Princess Peach, a nod at Nintendo, is a peach melba-like drink made from peach puree, fresh raspberries, lemon juice, and rye. Ray’s take on the Old Fashioned pairs lavender and Angostura bitters with sugar, which he then sets on fire while he mixes up a combination of Old Forester bourbon 100 proof and 86 proof. The Dude is—you guessed it—a riff on a White Russian that gets its sweetness from gum syrup and bitterness from LAMILL cold brew.

There’s no food on the menu here, but there is space for a food truck to pull up or, say owners, pop-up chef residencies. Rumor has it that the first chef to pop-up inside EightyTwo later this month will be Top Chef’s Brian Huskey.