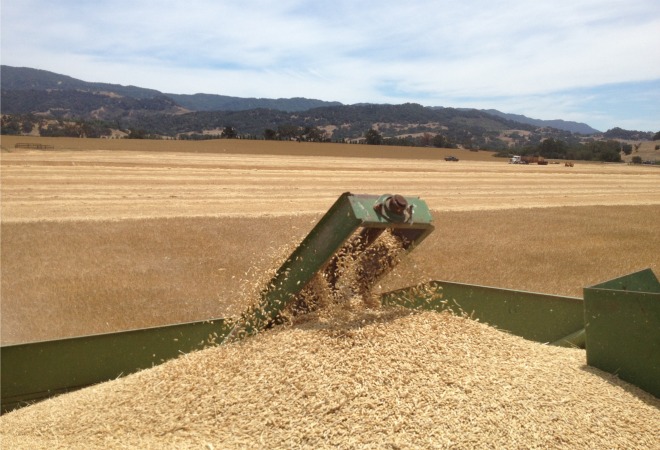 When Michael Pollan addressed the room at the annual Craft Brewers Conference in Denver this year, he had a cautionary message: “The farming behind beer is not yet as special as the brewing.” The keynote speaker advised the crowd not to rest on their laurels. “You are a part of agriculture — the grain economy which is the last sector to be addressed by the food movement.”

Southern California’s local grain economy has taken shape over the last year with the opening of Grist & Toll, the Pasadena-based mill, and the launch of Roan Mills, Andrea Crawford’s farm-to-toaster bread business. Fresh wheat berries and heritage grain flour have become more common on farmers’ market tables. Just two weeks ago farmer Alex Weiser harvested twenty acres of wheat, barley, and rye on his Tahatchipie farm. The week before, Nate Siemens of Fat Uncle Farms took a combine to his fields of Sonora Wheat, which he now makes into tortillas and sells at various farmers markets. But both Weiser and Siemens see possibilities beyond baking with local wheat. Just as a crop of Sonora Gold can be milled, mixed with water and yeast, and baked into bread, it can be malted and brewed into beer. “Malt,” Johnathan Porter tells me, “is often said to be the soul of the beer.” Porter, who is the brewer at Smog City Brewing Company in Torrance, goes on to explain, “it’s the basis on which every other ingredient is based. There are theories that barley was first domesticated to make beer.”

The concept of local ingredients in beer is not new. Porter is currently fermenting a saison with Alex Weiser’s mulberries, while Weiser’s prized Ogen melons  provide the rich texture and over-the-top aromatics for El Segundo Brewing Company’s Melon Collie White Dog IPA. When El Segundo’s Tom Kelley learned that Weiser had planted acres of barley, he introduced him to micro-malter Curtis Davenport in hopes that this year’s Melon Collie IPA could be brewed with malted barley from Weiser Farms.

Davenport, whose California Malting Company will officially open for business this fall, will be the first micro-malting operation to open in California. Already he has malted grains for Telegraph Brewing Company as well as nano-breweries and home brewers in Santa Barbara County. A former farmer, Davenport spent the past year testing varieties of wheat and barley for their performance in soil and in beer. His facility, slated to open this September, has the ability to malt 300 tons annually, but he needs farmers like Alex Weiser and Nate Siemens to help grow the grain. Similar operations in the Bay Area and San Diego are not far behind, and Davenport says the more the merrier: “Ideally every region could have a pool of farmers growing grain with one malting facility that supplies twenty local brewers.”

Within the brewing community, demand and enthusiasm for locally raised ingredients is growing nationwide. Kelley says that organizations like the Brewers Association are encouraging farmers to grow barley for flavor rather than efficiency, and local brewers like Kelley and Porter continue to be inspired by local produce. While we can’t expect to find beer in our local farmers market anytime soon (our inability to grow large amounts of hops in SoCal may prevent us from having 100% locally-sourced beers), in 2015 Angelenos will definitely see more local grain on farmers tables and taste more local malts in their beer. This September drinkers will get a preview of what’s to come during LA Beer Week when Eagle Rock Brewery will debut their yearly Unity Brew, a collaboration amongst local brewers. The goal for this year’s collaboration is to create a beer made from 100% California ingredients.

Right now, you can taste El Segundo’s Melon Collie IPA and Smog City’s Mulberry Saison at this year’s Feast at the Farm dinner on September 13th at Weiser Family Farm in Tahatchapie. The event will include a tour of the farm and food from chefs Evan Funke, Jeremy Fox, Dan Mattern and Roxana Jullapat, Brian Dunsmoor, Jessica Koslow, Erin Eastland, and dessert by Zoe Nathan, Laurel Almerinda, and Shiho Yoshikawa. Buy your tickets here.