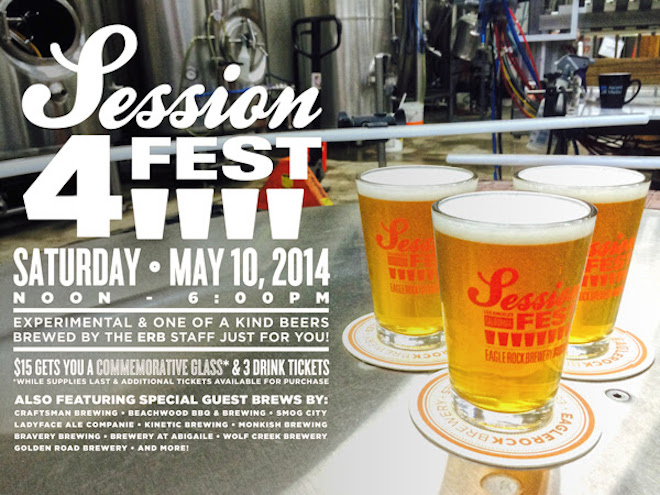 Session beers have been riding the popularity wave lately. They’re named for their low alcohol by volume (under 5%), which allows one to have more of them in a drinking session without getting plastered. That’s a nice perk when you’re trying to day drink over the course of a blisteringly hot weekend but don’t want to wake up Monday feeling like you were on a 48-hour rager with Lindsay Lohan circa 2009.

Saturday, May 10 Eagle Rock Brewery will be hosting its fourth annual ERB Session Fest, celebrating these wonderfully easy-drinking ales and lagers. Details on the beer list haven’t yet been released, but each member of the Eagle Rock brew crew will have an “experimental and one-of-a-kind” session beer of their own creation available for attendees to try on tap. On top of that, other local craft breweries will be getting in on the action with their own sessionable suds, including: Beachwood BBQ & Brewing, Bravery Brewing, Brewery at Abigaile, Craftsman Brewing Co., Golden Road Brewing, Kinetic Brewing, Ladyface Ale Companie, Monkish Brewing, Smog City Brewing, Three Weavers Brewing, Wolf Creek Brewing Co., and Alosta Brewing.

Fifteen dollars delivers a commemorative glass and three drink tickets, and yes, additional pours will be available for purchase. Hungry too? The Grill ‘Em All Truck will be on deck slinging burgers, fries, etc. Now all we need is a bunch of hammocks!