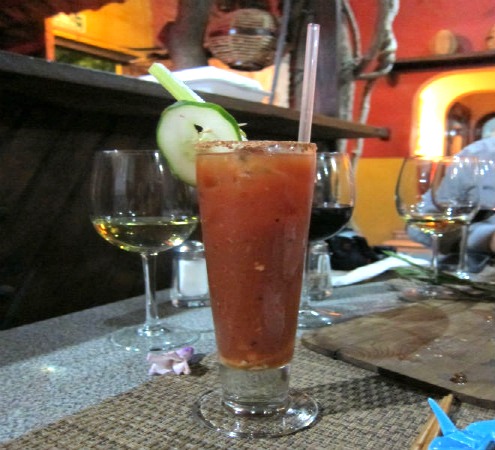 The very best Mexican foods (and drinks) start with the letter T—tacos, tortas, tlayudas. Here we showcase the tastiest “T” bites from the streets of L.A. (and Mexico).

Big changes are happening in Mexico’s craft drinking culture these days, from an exploding craft beer movement to the increasing use of Mexican ingredients by the top chefs and bartenders, who are making formerly mass-produced mixers like chamoy (savory sauce) and Clamato from scratch. I assumed that on National Tequila Day, July 24, I would pick up the usual mass-produced mixers I’ve always relied on, like Clamato.

That was until I tried the “Kochimato” at Kochi Kochi BBQ in La Paz by Mexican surf and turf master, chef Carlos Valdez, who also owns Buffalo BBQ and Al Forno Pizzas in La Paz.

The original recipe calls for Ketel One vodka, but I’m substituting the vodka with Tapatio blanco tequila for National Tequila Day:

Mix all ingredients together and chill.

*Dehydrate the product, mix with salt and roast in the oven then pass it through a coffee grinder to make flavored salts.

Salt the rim with an equal mixture of celery salt, cucumber salt, sea snail salt and chile powder. Dress your Kochimato with a pickled chile guero, a stalk of celery, and a slice of cucumber.

I still don’t think anyone should make their own ketchup, but once you try this Clamato, you’ll never go back.