Home Awards Watch Essential Oscars Cocktail: How to Make and Where to Find the Perfect... 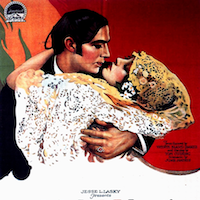 With the biggest Hollywood to-do going down this Sunday, lists of Oscar-themed cocktails are coming out of the woodwork (including one from me!). But one classic cocktail that actually has ties to the Silver Screen is the Blood & Sand, which was named after the 1922 bullfighting movie that established sex symbol Rudolph Valentino as a star. Even the official Oscars blog cites it as the cocktail to make for your awards night party. Blood is represented here by the cherry brandy and sweet vermouth while the scotch represents the sand. No one knows for sure who invented it, but its recipe first appeared in print in The Savoy Cocktail Book, published in 1930.

The funny thing is that this classic cocktail is not a bartender favorite. With equal parts orange juice, scotch, cherry brandy, and sweet vermouth it throws that whole cocktail balancing act of sweetness and acidity out the window. “It’s not regarded as one of the most balanced classics out there,” says Brian Summers of Black Market Liquor Bar in Studio City. “It gets a bad rap, but there are ways to cheat and make it taste good.”

I went to Brian (Comme Ca, Bar Ama) for the perfect Blood & Sand recipe because as the brand ambassador for William Grant & Sons, where he does seminars on scotches like Balvenie, I knew he’d have the best recipe to highlight the scotch in this notoriously sacchariney drink.

“The very first Blood & Sand I had was seven years ago at Comme Ca, and Sam Ross of Milk & Honey and now Attaboy taught me how to make it,” he says. “My palate back then was in no way refined, but even then I thought, ‘That doesn’t taste balanced or embody everything I have been learning for the past five months.’” He went on to say that orange juice (in addition to other citrus) works all right, but as a source of acid for a cocktail, it’s lacking. The trick to the perfect Blood & Sand? Give the cocktail some backbone.

“In my recipe I use Punt e Mes,” Summers says. “It has more bitter notes and spice notes. It also helps balance the cocktail.” instead of using juiced orange, Summers muddles an orange wedge to release some of the oils out of the peel. “It’s that pith that imparts a nice bitterness to it.”

The result is a complex Blood & Sand with a touch of sweetness and a bitter finish. Olé!

1. Place quarter of orange wedge in tin with the flesh side down. “We want that peel to have its say in this cocktail.” Add the quarter ounce of lemon (“because you need that bite of acid.”)

2. Add the Cherry Heering, Punt e Mes and scotch to the tin and then muddle. But readers be warned: It has to be Punt e Mes. “You need that bitterness, you need that spice,” Summers says. “Carpano Antica is lovely, but it’s kind of like liquid raisins. The Cherry Heering on its own has a slight raisin thing underneath that cherry thing so it’s too much deep, black sweetness.”

3. Add ice, shake and strain into an ice-filled rocks glass. How long you shake depends on what kind of ice you use. With regular home freezer ice, don’t shake long. “The idea is getting that balance of temperature and dilution. You want to get it as cold as you can by the time it’s at proper dilution,” Summers points out. “You know it’s at dilution when you strain out your glass and you still have a little bit of liquid trapped in that orange wedge.” No need to double strain, though: “I like a little texture.” Garnish with orange peel and brandied cherry.

Recommended scotch: Pick a scotch with a nice oak character. “I like a little oak smoke and not a peaty smoke for a Blood & Sand. Sometimes brinier scotches get weird with the orange juice.” So what does he recommend? “Balvenie Doublewood has a lovely light character to it. With those other ingredients it plays really well. Glenfiddich 18 makes a really delicious one; Monkey Shoulder is another one, a nice blended malt. You want oak character to add that base note. That’s why I chose the Balvenie Doublewood or the Glenfiddich 18 for a good single malt choice.”

If you’re looking for the perfect demonstration of a Blood & Sand with a side of history lesson, swing by The Varnish this coming Monday when bartender Marcos Tello (1886) is behind the stick to kick off the bar’s month-long Bartender Reunion Series. An expert in classic cocktails, Marcos can tell you all about the Blood & Sand’s backstory while executing a well-made one. Also, award-winning bartender Julian Cox is currently perfecting a B&S for Bestia’s new cocktail menu. Excited to see what he does with it. But as an Angeleno you owe it to yourself to order one up at Tiki Ti (more for the experience than the cocktail which is made with your choice of bourbon, tequila or scotch).