Home Drinking Cocktails Essential Cocktails: How to Make, and Where to Find, the Perfect Margarita 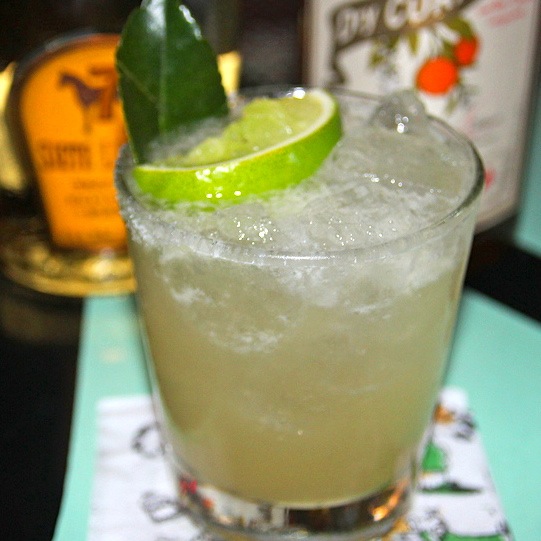 If you’re like me, your first encounter with a Margarita was the sports bar or Mexican chain restaurant variation: fruit flavored concoctions made with prefab triple sec and a mystery mix. Amiright? Prepare to have your mind blown. Turns out the perfect Margarita isn’t made with pre-packaged triple sec or mix and doesn’t taste like a tequila-laced slushee.

I had Las Perlas general manager Raul Yrastorza confirm. And he would know; he’s had a love affair with tequila ever since he lived in San Diego in the late ‘80s, hopping the border pretty frequently. In 1998, he opened El Carmen, the first tequila-dedicated bar in Los Angeles. Fast-forward to when 213 Nightlife’s Cedd Moses was thinking of opening an agave-focused bar of his own downtown, and naturally, he recruited Yrastorza.

Opened in 2010, with Yrastorza at its helm, Las Perlas boasts the largest selection of mezcal and tequila in L.A. Part of the success of a bar that’s themed around tequila and mezcal is that Las Perlas goes deeper than the decorations, past any piñatas or Day of the Dead skeletons.

When discussing the origin of the Margarita cocktail, it’s easy to get overwhelmed by its numerous legends. Was it the Valentine from some Mexican bartender in 1938 to an American actress who couldn’t tolerate any booze other than tequila? Or was it—as Jose Cuervo would have you believe—the creation of a beautiful showgirl/bartender named Rita De La Rosa who had a knack for improv cocktailing?

Yrastorza believes the Margarita cocktail actually originated in England, not Mexico. Scandalous! Turns out back in the 1930s, tequila was more popular in the U.K. than in the U.S. And in 1937 a recipe for a cocktail called Picador was published in WJ Tarling’s the Cafe Royal Cocktail Book. Comprised simply of lime, Cointreau, and tequila shaken together, the Picador is essentially the basic Margarita recipe, which Yrastorza asserts was then disseminated by jet-setters hopping from Britain to L.A. to Mexico.

As for Yrastorza’s particular style of Margarita, after his experiences from starting with the Sunkist-and-OJ margaritas of dive bars to opening his own tequila bars, he’s streamlined a recipe that “not only works for efficiency but it’s a great Margarita to make at home” that you can also add flavors to if you wish. “Once you have this base, it’s pretty much a home run.”

Las Perlas’s version  is a riff on the classic, which is just lime juice, agave nectar, Cointreau, and tequila. Yrastrorza swaps out the Cointreau for a touch of dry curaçao: “It’s important to add the bitter orange aspect to the Margarita… to cover the sweet, the sour, the bitter, and also the salty; it gets that whole savory aspect into the cocktail.”

1) If you’re going to rim the glass with salt, wet the outside of the glass with lime. Salt half the rim, not the entire circumference, and only apply the salt to the outside of the glass.
2) Combine the orange curaçao, agave nectar, lime juice, and tequila in a cocktail shaker filled with ice cubes.
3) Shake vigorously for 5 to 8 seconds.
4) Strain the cocktail over new ice OR serve it up as is. (Since they use the slower-melting Kold-Draft ice at Las Perlas, they just dump the entire cocktail in the glass.)
5) Garnish with lime and Kaffir lime leaf for presentation and aroma.

More info:
You use blanco/silver tequila if you want a brighter Margarita or reposado for a warmer one that accents the confectionary notes of the cocktail. Yrastorza always pushes people toward the reposado version. “I think it’s important to have a little of the wood notes from aged tequila in a Margarita.”

Now about the salt. Personally I don’t like salt with my Margarita; I find it jarring. And apparently most of the Las Perlas clientele opt for the salt-less Margarita as well. So why salt at all? Yrastorza says if you look at the history of the Brandy Crusta, another drink credited as being the inspiration for the Margarita, it called for sugar on its rim, and maybe it got translated to salt in Mexico. But make sure when making your cocktail, you don’t salt the inner rim of the glass, a la TGIFridays, as the liquid of the cocktail will just pull the salt into the drink.

For a great Margarita in L.A., besides Las Perlas, Yrastorza recommends cocktail-serious joints like Rivera downtown and Copa d’Oro in Santa Monica. “Both have the same integrity; their interpretation of the Margarita is absolutely correct,” he said. Agave advocate and bartender Cari Hah (Neat and Cole’s) also makes a mean Margarita, with love being the secret ingredient. And surprisingly he likes La Cabana in Venice. “They make a decent margarita, but not an old school one like us. But for some reason, it tastes good. It’s not the greatest, but it’s fun and goes with the food.” But for the best worst Margarita in the world, he says to check out Frank & Hank’s in Koreatown. Snow, its elderly Vietnamese bartender/owner, LOVES making that drink, even though it’s sweet and sour mix, Rose’s Sweetened Lime Juice, tequila, limeade, and table salt. “But it’s so bad, it’s good!”