Home Drinking Cocktails Essential Cocktails: How to Make, and Where to Find, the Perfect Mai... 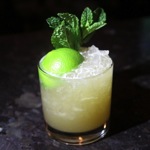 Nothing makes a party crowd ooh and ahh like building a tiki drink. The multiple rums, the tropical garnishes, the syrups… it’s all very exciting. And the best tiki cocktail to add to your ever-expanding repertoire is the often misinterpreted “Mai Tai.”

Despite your previous dealings with this classic cocktail at Islands, a Mai Tai does NOT involve pineapple and orange juices, nor does it come with a pineapple wedge or a tiny umbrella garnish (as much as I love to prepare for miniature rain showers).

I know because I asked rum expert, RumDood Matthew Robold of Seal Beach’s 320 Main. He’s been the champion of rum since he first fell head over heels with a bottle of Admiral Rodney aged rum on a vacation to St. Lucia in 2005 and he now heads Caña Rum Bar’s monthly Rum Society. When asked about the best Mai Tai recipe, he immediately jumped into its dramatic history.

Apparently when Vic “Trader Vic” Bergeron first created the original Mai Tai in 1944, it only used one rum: Wray & Nephew 17 Year Old Rum. The cocktail proved to be so popular that the world supply of the rum ran out and Wray & Nephew stopped making it. So to replicate that flavor, Vic started blending rums. “He blended a Jamaican rum—since Wray & Nephew was Jamaican—with a Martinitian rum. And depending on who you talk to, some people will say it’s gotta be Rhum Agricole, because that’s the most common rum out of Martinique these days,” said Robold. “But when Vic came up with the drink, Rhum Agricole really wasn’t that big, so it might have just been what today they call Rhum Industriale, which is a molasses-based rum.”

The rum geek that he is, Robold conducted a taste test of over 150 rum combinations, searching for which made the best Mai Tai. “What I came to with an approachable, well-rounded, awesome Mai Tai was Appleton Estate Extra Rum from Jamaica and Clement VSOP from Martinique. It’s a kickass Mai Tai.” Jamaican rum tends to be funky because it gets double distilled, and since the Jamaicans don’t clean the still between runs, the distillate picks up the flavors of what was left behind, creating a sour, overripe banana sensation. Combining the Martinique rum with the Jamaican helps dry out the funk and prevents the cocktail from getting too sweet.

At 320 Main, they use the Appleton Estate Reserve instead of Extra which is funkier and gives you a few rough edges. For his own personal Mai Tai, Robold likes using Smith & Cross for the Jamaican because “it’s super heavy, super oily, a little rough, and it just punches you in the face.”

Generic Mai Tai recipes simplify the cocktail with the use of a stronger, smoky dark rum and a cleaner light rum, but for a proper Mai Tai, Robold insists that it has to be a blend of Jamaican and Martinitian rums, “because you want that funky, acidic, vinegary taste to combat the curaçao and the orgeat.”

1) Put all the ingredients in a tin filled with cubed ice.
2) Shake for 10 seconds to get it ice cold and strain it into a glass.
3) Top with crushed ice.
4) Now for the “island and the palm tree.” Slap around a mint sprig. “The aroma works nicely off those sharp orange flavors and smells coming off of the drink.” Then add it as garnish along with a spent lime shell for color.

More info:
The use of crushed versus cube ice depends on how much dilution you want in your cocktail. 320 Main uses crushed, and Caña shakes it with cubes and tops it with crush. “With every drink you want a little bit of dilution and what it comes down to is what flavor profile you’re looking for,” said Robold.

Not a DIYer? No worries as you can find the best Mai Tai in L.A. at 320 Main, Caña Rum Bar, and The Varnish. That’s right, the downtown bar known for stirred classics makes a mean Mai Tai. “They’ve got great stuff there and tons of homemade ingredients,” said Robold. When asked about iconic L.A. tiki bar Tiki Ti, Robold said that it does drinks in “Don the Beachcomber” style, so their Mai Tai uses some different ingredients that aren’t his particular cup of tea.