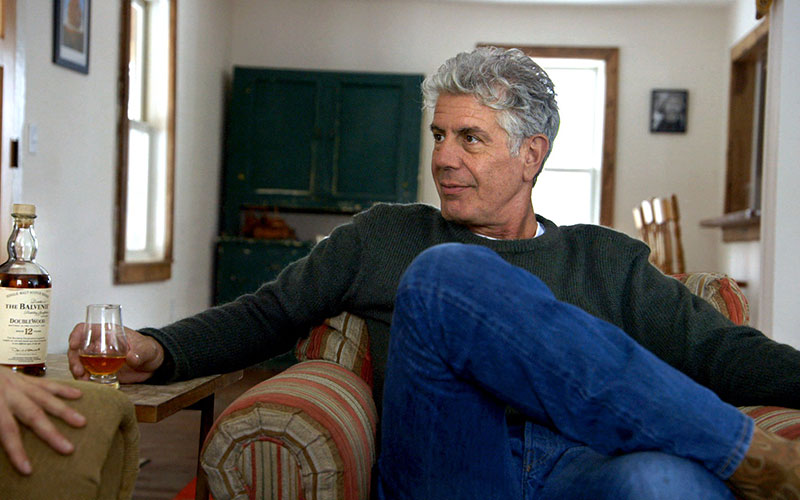 In the smoky spirits world, scotch may have recently taken a back seat to mezcal, but that hasn’t stopped Parts Unknown star and noted Guy Fieri nemesis Anthony Bourdain from jumping into the scotch content game.

He’s teamed up with Scotch distillery Balvenie on a web series called Raw Craft where he drinks, learns about the whisky-making trade, and then proceeds to drink some more. We sat down with him to get some tips on sipping dark liquor and what to pair with an In-N-Out burger.

How to Drink It

“Depending on how good it is—if it’s really really really good, I’ll go neat,” Bourdain said. “Every once in a while, even with a pretty good or a very good scotch maybe one ice cube. I know they wince in Scotland when I do that, but I like it like that sometimes depending on how I’m feeling.”

What to Eat with It

“I have a universal hangover cure, but spicy leftover Chinese food, Szechuan food would be a good meal,” Bourdain said on recovering from a post-scotch binge.

“You know, I don’t go out and socialize a lot,” Bourdain said. “I stay at the Chateau. If I’m doing some serious drinking it would be there because I don’t have to drive. I just stumble to my room. And it’s a nice bar, I like it very much.” If he does make it off property, Bourdain goes for the low-key.

“You know, all my favorite bars in New York are gone. There aren’t many great dives left in Manhattan. Here there still are dives,” he said. “A Jumbo’s Clown Room wouldn’t exist in New York. I love that place. Musso & Frank, the sort of irony-free dive bar as well. I was in Boyle Heights drinking at these Chicano places and it was awesome. Red lights, Christmas lights, pool table, with Morrissey on the jukebox which I thought was a real anomaly, apparently big in the Chicano community. Morrissey’s huge. This was surprising. So I think the dive bar scene is better here than in Manhattan. A real reversal of fortune, I’m afraid.”

“I don’t think they’re an appropriate—look, I admire you if you’re drinking really, really really good scotch with an In-N-Out burger, I think that’s kind of cool,” Bourdain said. “I would not question your lifestyle choices. That’s not something I do. I like the chocolate shakes there.”