Home Drinking Cocktails Day Drinking on the Sunset Strip: Skybar Gets a Makeover 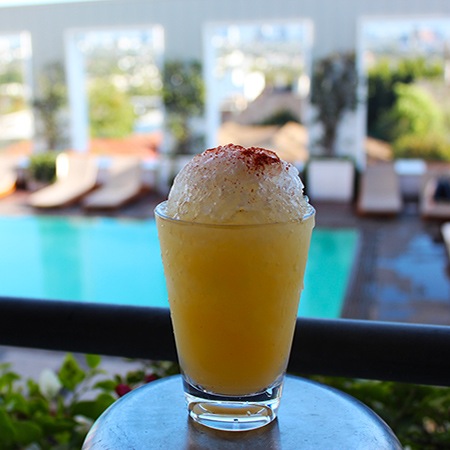 Skybar at the Mondrian has been the spot to see and be seen on Sunset Boulevard for 18 years. In L.A. nightlife years, that’s gotta make it, like, 100. The A-list pool bar has witnessed the rise and fall of Tara Reid and cosmopolitans. So with the popularity of the craft cocktail, it made sense for the place to finally get a facelift.

The Sayulita summer series, inspired by the Mexican beach town of the same name, turned that sunken and forgotten area downstairs from the pool into a breezy oasis that’s perfect for day drinking. There’s AstroTurf to accommodate a picnic, communal seating, and bistro tables along the wall. You can even laze about on the hardwood steps leading up to the pool area.

Barmen Julian Cox and Josh Goldman of the Soigne Group (Acabar, Circa) were a natural fit to create a cocktail program that would complement the new look as well as the new food menu that includes pig-ear tacos and churros from the hotel’s Herringbone restaurant.

“These are things that Julian and I have done for years,” said Goldman. “Bringing fresh ingredients into Latin-themed cocktails is Julian’s wheelhouse. For Skybar, it was important the drinks be delicious, complex, and compelling without being terribly difficult to execute in a high-volume bar.”

The result is two cocktail menus: one to showcase a new cold-pressed juice program upstairs and the other to bring home the Sayulita concept and say good-bye to the dated ’tinis. For the juices, Cox and Goldman worked with a nutritionist and did many an R&D session to figure out how to make kale juice palatable in a cocktail. “It’s all about balance,” he said. “It’s understanding and breaking down the characteristics of the kale, which is slightly sweeter than wheatgrass. We use a lot of agave, but are also very conscious about what we put into people’s bodies.”

Fans of Julian Cox’s work will be thrilled to see his Barbacoa mezcal cocktail on the menu. Because of its approachable nature, it was the one mezcal drink that passed the hotel’s tasting test. “We messed around with a bunch of different mezcal cocktails, and the one thing that all the girls were saying was that it was too smoky,” said Cox. So the bartenders decided to make the Barbacoa, which uses two ounces of mezcal, except they didn’t tell the tasters until after they drank it.

You can try the cocktails for yourself now during Sayulita’s soft opening. Its official debut is May 6, and the series will run through September, depending on the weather. Hours are Sunday and Monday, 12 p.m. to 10 p.m., and Tuesday through Saturday, 12 p.m to 2 a.m. (food is only served until 10 p.m.). Bonus: You don’t have to be a hotel guest to partake in this pool scene.