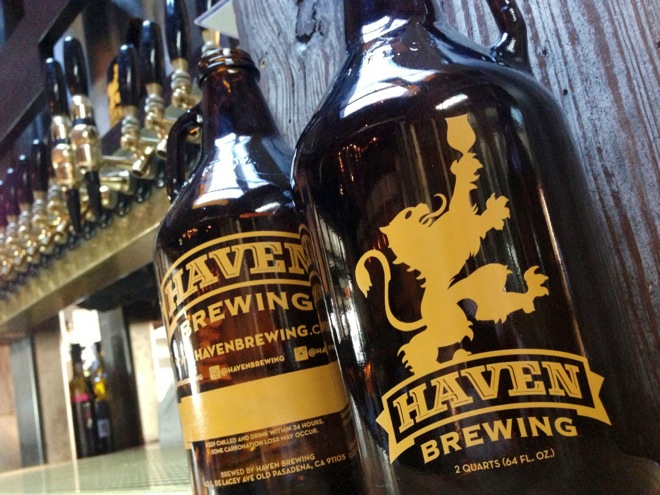 Fans of Pasadena’s Haven Gastropub + Brewery got quite the surprise last weekend when they learned that the celebrated three-year-old business had had closed. A sign on the door told customers: “Go to Lucky Baldwins,” referring to Pasadena’s veteran craft beer bar located three short blocks away.

A more formal note on the popular brewpub’s Facebook page—which has since been deactivated—read: “We fought for our life in this building with a cursed history and took every one of those jobs very seriously. The banks who own the building forced us out through complicated circumstances, and sadly there was just nothing we could do.”

The business partners who formerly operated the brewery have since gone on to explain that they’d had an amicable split prior to the surprise closure. Former partner Ace Patel took over interest in the group’s other venture—Taco Asylum in Costa Mesa—as well as ownership of Haven Pasadena, which was to be rebranded as part of the separation agreement. Wil Dee and Greg Daniels will now focus their efforts on their other existing businesses: Provisions Market and Haven Gastropub in Old Towne Orange, which Dee and Daniels assert are in no danger of shuttering.

Sadly, there is no brewing operation at the Orange location, which, at least for now, means the end for the Haven Brewing leg of the operation. The actual brewing equipment is reportedly heading to an upcoming brewery in Orange County, but it’s unclear to know where former brewmaster Brian Thorson might land. Not that he’ll have any trouble finding a job; besides serving as head brewer at Drake’s Brewing Co. in San Leandro, his Hops Inc. IPA recently took a prestigious silver medal at the biannual World Beer Cup.

Regarding the “building with a cursed history” comment, numerous restaurants and even another brewery have closed in that very location over the past two decades. It began in 1995, when Brignole Fitness Training Club, owned by former Mr. Universe Doug Brignole, closed after 11 years of business due to an alleged steroids scandal and mounting debt. Jerry’s Famous Deli replaced it in February 1996, but closed in May of ‘99 when Pause Restaurant bought the property for a whopping $4.12 million. Pause—which this very magazine mentioned, both for the complimentary lime cotton candy that accompanied the bill and of course the “$2 million Sotheby’s-worthy collection of Americana, featuring Wurlitzer jukeboxes and the remnants of a 1920s Coney Island carousel”—permanently paused operations after just three months in business. Pasadena Brewing Co. opened there after several months of vacancy and remained open until August 2004, at which point it rebranded into a sports bar, but it too ultimately went the way of the dodo. Bovine-centric Union Cattle Co., pan-Asian-sushi-sake emporium Dena House, and gastropub Brix 42 would suffer the same fate, and now, so has Haven.

Interested in being the next tenant? It’s only $3 per sq. ft.!