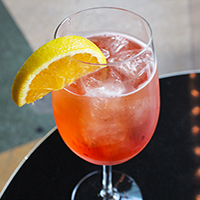 Before the Broadway Bar’s recent makeover and relaunch last month, it wasn’t really where discerning drinkers went for a cocktail. After all, it first opened its doors in 2005 B.S.G. (Before Seven Grand) and thus before the cocktail renaissance and before much of the revitalization of downtown. Until the recent makeover of its cocktail menu, which essentially hadn’t been updated since the bar opened, you could still find a Pomegranate Lemon Drop, a Mojito was served in a pint glass, its bartenders free poured and didn’t skimp on the simple syrup. Sure why not?

Plus, foot traffic before back then was close to nil. “Nine years ago there was a lot of homeless people living across the street in tents,” said Assistant General Manager Ozborne Williams, who helped open the bar. Over the course of a decade, residential buildings came in, Umami Burger (originally known as Umamicatessen) arrived, followed by Urban Outfitters. Finally the Ace Hotel brought even more attention to the Broadway Theater District, and along with it new clientele into the bar. “I’d be at the bar on Saturdays and before it would be nothing. And now you see all these people and a different variety,” said Williams.

While 213 Nightlife’s Cedd Moses populated downtown with more and more craft cocktail drinkeries, some award-winning like The Varnish, the contrast of Broadway Bar’s out-datedness became painfully obvious. It was becoming difficult to see that the bar shared the same bloodline with the other 213 bars. Even Golden Gopher, Moses’ first-ever downtown bar which celebrates its 10th anniversary this Thursday*, got a craft beer update. “We’re the ‘Last of the Mohicans’,” said Williams, “meaning the last [213] bar to transition to the fresh juices.”

Fortunately, with a redone cocktail menu created by Williams and 213 Beverage Director Eric Alperin, and a decor refresh by designer Ricki Kline, the nearly decade-old bar has been elevated to the standards set by 213 post-Seven Grand. The drinks aren’t the crafty kind you’d find at a bar like Honeycut, but out-of-towners and those who just want to get their drink on will appreciate the simplicity and straightforwardness of the menu. It features recognizable classics like the Dark & Stormy, Mojito, and Paloma. There are also approachable new signature drinks like The Chapman, a light gin cocktail of cucumber, simple syrup, and lime, which Williams swears will change the minds of those who detest gin drinks.

The original champagne cocktail list, which had five cocktails and actually listed brunch favorites Bellini and Mimosa, has now been scaled down to three Prosecco cocktails. “We decided to shorten that so we have an Aperol Spritz, French 75, and we kept the St. Germaine because that was a very popular cocktail,” said Williams.

Broadway Bar is still a high-volume bar with fuss-free drinks to immediately satiate the thirsty weekend masses, but at least now ingredients are consistently measured, the juices fresh, and the Mojito is served in a more appropriate Collins glass. They’re even looking into getting crushed ice.

*This Thursday Golden Gopher will celebrate its 10th anniversary with a party from 8 p.m. to 2 a.m. featuring a Jameson ice luge, a free shot at midnight, photobooth, and cake.