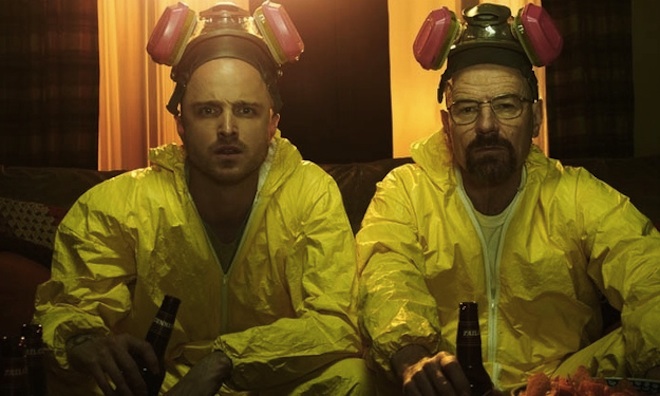 What do you pop open after a long day of meth-making? Albuquerque-based Marble Brewery has just the thing. Just months after Game of Thrones got its own beer, Breaking Bad, the AMC show that follows the moral compass of Walter White, a cancer-striken father and high school chemistry teacher turned drug dealer, will get its own I.P.A.

Marble Brewery has appeared as a location on the hit show—which is now entering its final season—and it’s clear that the cast are fans of the brewery. In somewhat related news, it was also announced this week that Downton Abbey folk were getting excited to taste a new line of wines based on the period series.

Breaking Bad’s beer is called Heisenberg’s Dark. It is not blue and does not contain meth, which may or may not be a missed marketing opportunity. Here are three other shows that should get their own brew.

Dexter: Now entering its final season, Dexter chronicles a serial killer and blood spatter analyst in the Miami Metro Police Department. Often, after a hard day on the job, Dexter Morgan and his sister Debra share a beer. It would be especially apropos if it was a crimson-colored Blood Stout. Perhaps brewed off a Miami dock and using actual blood spatter paper for the label, Blood Stout could be the beverage that both calms and ignites the serial killer within.

Arrested Development: Did the newest and final season of the now Netflix-produced show cure a cult audience of its craving for money-grubbing antics from Jason Bateman, Michael Cera, and family? Since they’ve already taken the banana stand on tour, perhaps it’s time for the kids to grow up and start thinking about home-brewing. They can use bananas to flavor it, and perhaps add a touch of chocolate for a Banana Brown Ale. The new unofficial slogan: There’s money in the banana brew.

The League: Everyone who has seen and laughed at FX’s The League knows two things: you don’t need to know anything about sports to enjoy it, and it’s better watched with a beer in hand. The plot follows a group of friends involved in a fantasy football league. Throughout each season, the characters rally to beat their friends at what they call the Shiva Bowl. Named after their former high school crush (a lady named Shivakamini Somakandarkram) the Shiva Bowl winner gets to claim ownership over the Shiva, a homemade trophy, until the next season. To build upon the classic American tradition of football and beer, The League should introduce its own, home-brewed Shiva IPA. Andre can brew it in his apartment during one episode, and Taco can help by adding a splash of bong water.