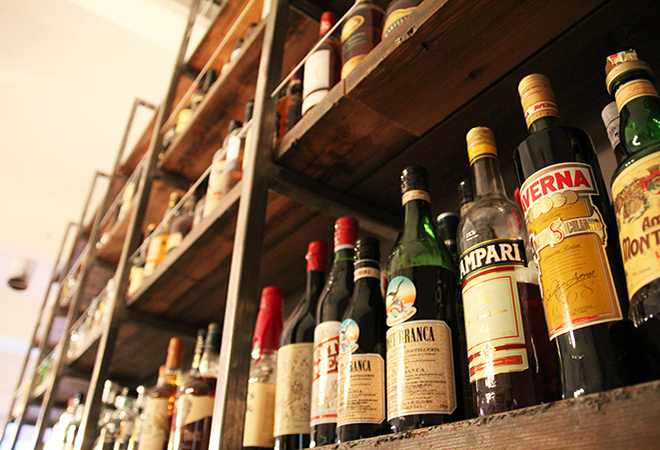 Your party is a rager. You’ve just restocked your cheeseplate for the twentieth time, everyone loves your Spotify playlist, and your light show is killing it. But then you realize your cocktail punchbowl has just run dry, your liquor cabinet is bare, and your keg is all tapped out. Nobody is available to drive.

Fortunately, in Los Angeles—if you live in the right neighborhood and don’t mind paying extra for the convenience—you can restock your booze via smartphone app or online. In most cases, your delivery will arrive in less than an hour.  You’ll never go thirsty again!

Note: For a price comparison between these services, I looked at the price of Bulleit Bourbon. At K&L Wine Merchants, which could represent your typical liquor store, that bottle went for $21.99 on store shelves.

Drizly (iOS and Android) was started by three enterprising classmates in Boston College who wanted to make a “Amazon for alcohol.” Apparently it’s all the rage in New York and Boston and will be expanding to Los Angeles at the end of this month. It’s the only service so far to get the A-OK from alcohol control boards in the states and has its drivers use forensic ID verification technology to keep things on the up and up. Delivery time: 20 to 40 minutes. Service area: From Downtown to Santa Monica and from Silver Lake to Miracle Mile. Price: Bulleit Bourbon, $28.99, plus tip and delivery, which varies depending on area, at most $5.

Lasso (iOS), a San Francisco-based app that is also accessible through a website, will not only deliver your liquor but also add-on a bouquet of red roses or any gift basket of your choosing via Mel & Rose on Melrose. Great for a night with that special someone who likes to party. Delivery time: Within two hours. Service area: West Hollywood. Price: Bulleit Bourbon, $26.99, with free delivery.

Saucey (iOS) is already rated as the number-one alcohol delivery app in the Apple App Store and has been described as “Uber for alcohol” in that it hires local drivers to do the deliveries. And if you’re of generous heart, you’ll like that Saucey donates a percentage of every sale to nonprofit Charity Water, which provides clean drinking water to developing nations. Delivery time: 20 to 40 minutes. Service area: Santa Monica and West Hollywood. Price: Bulleit $30.50, tax, tip, and delivery included.

Sqyre is an L.A.-based app that isn’t available to download yet on iOS or Android, but you can place orders through its website. As of now, there’s not much of a selection with only three kinds of beer, rum, tequila and whiskey available. Delivery time: Under an hour. Service area: Westwood and Brentwood at the moment. Price: No Bulleit, but Macallan 12 is $64.99 ($49.99 K&L) with free delivery.

For underage drinkers hoping to exploit these apps, keep in mind that the delivery person will for sure check your I.D. and, as in the case of Thirstie, will actually return the booze to the retailer AND charge a $20 restocking fee. So don’t even think about it, McLovin!