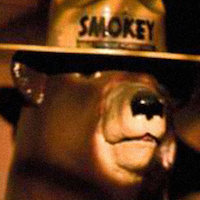 When Atwater Village’s rustic Bigfoot Lodge introduced its fun, camping-themed cocktails to L.A. 15 years ago, the neighborhood regulars sipped on PBRs and saccharine Girl Scout Cookie cocktails while cozying up to the Smokey the Bear statue. Back in the early days of my blog, I was a huge fan of the Toasted Marshmallow, a sweet, creamy concoction of vanilla vodka and a trio of liqueurs that came with a flaming marshmallow garnish. It was the era of the chocolate martini, the Lemon Drop, and the Appletini.

But fast-forward to now and the cocktail scene has evolved to one of fresh ingredients, small batch spirits and housemade syrups. ‘Tini bars like Lola’s and Beauty Bar have since closed down but Bigfoot Lodge, the 1933 Group’s first bar, has endured and even adapted to the changed times with a Sazerac-inspired Saza-Squatch and Bigfoot Old Fashioned.

Recently Bobby Green, 1933’s designer and partner, spruced up the beloved space by adding two front smoking patios and a real hardwood floor. For a menu that would really get the attention of the new breed of cocktail drinkers, cocktail consultants Aidan Demarest and Marcos Tello of Liquid Assets were brought on board. The pair have worked together on cocktail programs for L.A. landmarks like Tom Bergin’s Tavern and the Los Angeles Athletic Club where they’ve shown respect for the regular clients while appealing to new customers.

For the brand-new menu, which debuted last week, not only have Tello and Demarest expanded the spirits list with a Western Whiskey and Western Rye section (American spirits made West of the Mississippi) but they created cocktails using quality spirits and ingredients. “People’s palates have changed and have come to expect more out a drink these days,” said Marcos. “We basically just gave them an update much like they did with some of their decor and lighting.”

The drinks still retain the sense of humor for which 1933 bars have become known. “When you walk into Bigfoot Lodge you really get a sense of the kitsch and cheekiness of the place and we wanted to carry that through with the cocktails,” said Marcos. “So we decided to do Irreverent Cocktail names such as the Suspender Free Zone, Donkey Punch, and Make it Rain.”

However, the bar hasn’t adios-ed the Toasted Marshmallow or the Girl Scout Cookie which remain favorites of the bar’s regular customers. Although the Cookie still retains its DeKuyper-intensive ingredients, Bigfoot general manager (and GM of 1933’s soon-to-be-opened Bar Clementine) Kyle Ackley updated the Toasted Marshmallow with light rum, 1921 Crema Liqueur (tastes like white chocolate and coffee), honey, a bit of Fernet—which adds a little char to it and dries it out. The result is not only a well-balanced crafted cocktail but a stomach-friendlier one. “It’s the bridge of what we were doing and what it is now,” said Kyle. It’s not on the new menu but you can still order it, along with the Girl Scout Cookie.

Heads-up: Other secret menu items for those in the know include $3 Olympias and $5 Mystery Shots, a bourbon-based infusion in a green jar.

As for the spirits list, there is still something for everyone, i.e. the flavored vodka and flavored whiskies. “The amount of selection we have has doubled. And one thing we try to do is add something cool, craft and unique to at least every category. So even with the flavored vodkas, I added the Hangar Kaffir Lime,” said Kyle.

And adventurous souls will be happy to hear that a flight option is in the works. “We’re thinking about doing a Western Whiskey flight. Take you on a Western tour because they’re so different, so unique.

What’s an example of what he’d pick for a flight? “Since High West is such a cool, new niche in the market I’d pick the Campfire because it’s so different. It’s bourbon and scotch and rye kind of combination, it breaks those rules. The Old Portero Rye is such a funky, cool rye and it’s really different. It’s almost odd. It’s a Maryland style rye, one that they were making back in Colonial times. It’s almost like a malty rye. The Bainbridge organic, that’s cool and different as well. Those are my top three.”

In the meantime, exploring here won’t be too hard on your wallet. For example, High West’s Son of Bourye is $10 here while it’s $12 at Seven Grand. “We’re still a little bit on the bottom part of the pricing because the neighborhood and the location, we want to be a little bit friendly,” said Kyle.