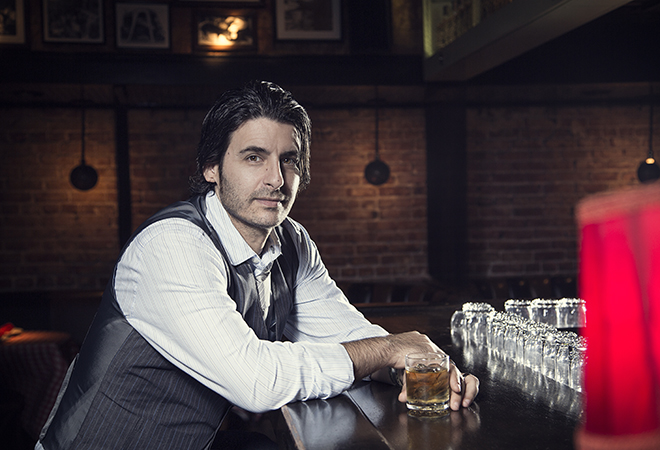 Before Matthew Biancaniello did farm-to-glass cocktails and Sam Ross trained that first crew of upstarts like Julian Cox at Comme Ça, and even before Cedd Moses erected his first downtown bar, the Golden Gopher, Jones Hollywood bartender Eric “ET” Tecosky created the Surfer on Acid, a shot of Jäger, coconut rum, and pineapple juice, way back in the early ‘90s. And he’s been tending bar at Jones on Santa Monica Boulevard since 2001. You can find him there on Tuesdays and Wednesdays.

Tecosky is old school and my kind of guy: His hero is Frank Sinatra, his drink of choice Jack on the rocks, and his Facebook status updates do not jam up my feed. The first time I actually got to know him was over frozen Irish coffees at New Orleans’ Erin Rose during Tales of the Cocktail. And I found him to be a really cool, down-to-earth dude who just also happened to create the first premium bottled olive juice, Dirty Sue. It’s what bartenders like Dale DeGroff and Jeffrey Morgenthaler use for dirty martinis.

I was able to catch up with him for my recurring Q&A with L.A. bartenders. Here are his quick answers.

What’s a popular drink at your bar?
The No. 143. It is named after the 143 bottles of Jack Daniel’s whiskey above the bar. (There used to be 144, but someone stole one while we were open!) It’s made with Jack Daniel’s, fresh lemon and grapefruit juice, Peychaud’s bitters and honey syrup.

Where do you draw your inspiration from?
Sometimes I will look at a classic cocktail and try and find a way to put a new twist on it, sometimes I get into a new (or new to me) ingredient and build a drink around that, and sometimes a customer will ask for something in a way that results in a new cocktail. Another great way to get inspiration is to spend time in ethnic markets and farmers markets and just pick something that looks interesting and try to make it happen. (Also a great way to make some awful drinks, too.)

What’s the best night to go to your bar and why?
Jones is always fun, but if I had to pick, I’d say earlier in the week. Monday through Wednesday. It’s not as crowded as the weekends and it’s a great vibe. Before I started working at Jones , I would hang out there quite a bit. As a customer, Jones just has a very welcoming atmosphere. You feel like you are home.

The next big thing in cocktails is_____?
Simplicity. The great thing about the cocktail “revolution” is the fact that better booze and better ingredients are readily available. But, they don’t all need to go in the same drink. If you look at some of the classics that have stood the test of time and please a large audience you will see that they are not overly complicated: the Old Fashioned, Margarita, Martini (dirty, of course), etc. Some bartenders try really hard to be unique and inventive. That can be cool, but at the end of the day, simple with an X factor is usually the winner.

What’s your hidden talent or if you could have a superpower what would it be?
I wish I could have conversations with my dogs. I would love to explain how not barking is almost always better than barking. I would love to hear what they have to say, too. Except of course if they said something like, “Are you sure you want that doughnut? Have you stood in front of a mirror lately?”

Where do you like to drink in L.A.?
I love a good dive bar.  But typically, it’s more about who, than where. When I’m not working, I like to go visit friends at their bars. It’s always fun to know a few people when you are out and the bartender is a good one to know. When Michael Neff is at The Three Clubs I am there. I follow Damian Windsor everywhere and I love to take my “break” at work and say hi to Joe Brooke at The Formosa across the street.

Where’s your favorite place to eat in L.A.?
Dan Tana’s is probably my number one. The food, the vibe, the attitude–tough to beat. I also love The Rainbow Room. It’s where my wife and I had our first date. Also, my man crush, Robert Plant, used to hang out there quite a bit back in the day…

What do you like to drink when you’re not working (doesn’t have to be cocktails)?
I really can’t remember the last time I had a night off that did not include a glass of Jack Daniel’s and some ice. Delicious. And, it’s what Sinatra drank. Considering I’m an awful singer, it’s the only way I can be a little like The Chairman. Also, when I’m in New Orleans, no trip is complete without a refreshing, frozen Irish coffee. So good…