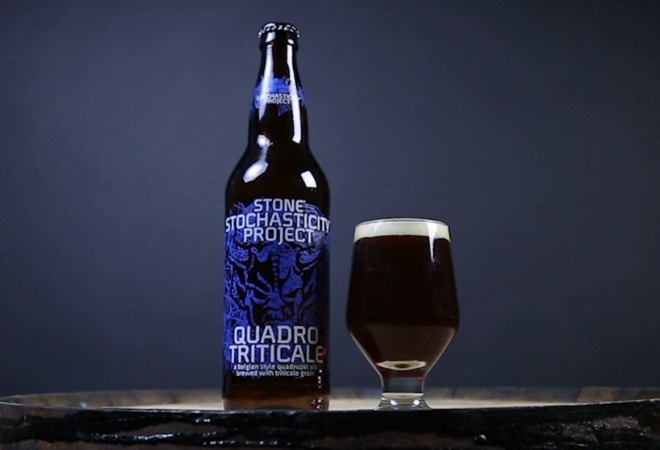 It is often said that brewing beer is equal parts art form and science, but in the case of Escondido-based Stone Brewing Co.’s lineup of limited-release bottles, science certainly takes the forefront.

One of the newest (and least pronounceable) beers is Project Quadrotriticale, a boozy-sweet Belgian-style “quadrupel” ale that packs plenty of flavor but itsn’t as boozy-sweet as you’d expect.

As Stone geekily describes it:

“When testing the inherent makeup of the quadrupel—the warmest and darkest of Trappist monastery beer styles—we added triticale, a hybrid grain combining the pleasant flavor of wheat with the elemental durability of rye. We originally explored this nouveau twist on a traditional style in 2010, when brewing a test batch of a potential beer in our Stone Vertical Epic Ale series. Brewmaster Mitch Steele reached for and subsequently improved on that pilot recipe, bringing it to life as part of the Stone Stochasticity Project. The result is a quad that’s lower in sweetness, but rich with dried fruit and spice nuances.”

We picked up a bottle for $9 at our local craft beer shop. It’s available at most stores specializing craft beer around L.A.

Pour: This is one silky beer. Foam is pretty minimal, but there is a nice little tan head on top. The color is a deep amber-brown color.

Aroma: Not a huge aroma on this beer. It smells a bit like ripe grapes and plums. Not too yeasty or too malty, but somewhere in the middle.

Taste: Very interesting. It’s an incredibly smooth beer for 9.3% ABV. It’s not sticky sweet, but definitely tastes of brown sugar and candied fruit. It might not convert anyone who isn’t already into Quadruple-style ales, but it’s an excellent, approachable American take on one of the most revered monk-brewed styles of beer in the world.