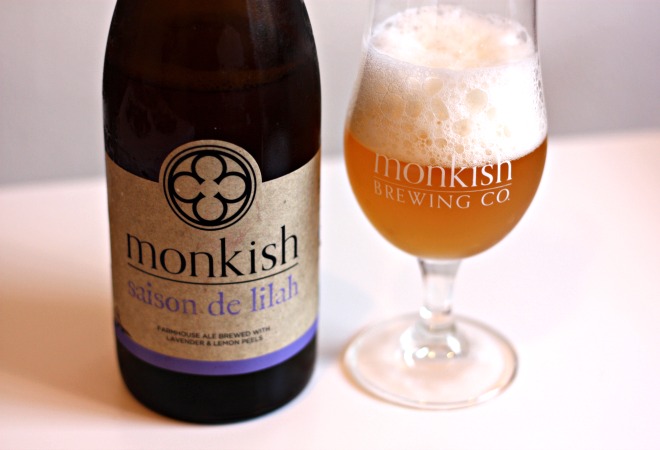 The taplist at Torrance’s Monkish Brewing can often look as much like an herbal apothecary as much it does beer menu. Owner and head brewmaster Henry Nguyen doesn’t shy away from using unexpected herbs and spices in his Belgian-style beers, including elderflowers, honeybush tea, chrysanthemum, and pink peppercorns. The results often end up very interesting, intriguing beers—which probably explains the great success the homegrown outfit has had since opening two years ago.

One of those is interesting beers is Monkish’s newest bottle release, Saison de Lilah, a Belgian-style farmhouse ale brewed with lavender and lemon peel that clocks in at 6.3% ABV. We picked up a bottle at Echo Park’s Sunset Beer Co. for $10, but you can also find it at beer shops such as Buzz Wine & Beer Shop or Select Beer Store in El Segundo. Alternately, you could visit the brewery’s tap room to enjoy a tulip glass on draft (check their website to see what’s available). Monkish has been putting out a bevy of great bottle releases lately, including another saison that is dry-hopped, but it was the purple-labeled charm of Saison de Lilah that first caught our eye.

Pour: White, fluffy head that takes a while to settle. The beer itself is a beautiful, slightly hazy yellow-gold color. It’s quite bubbly and effervescent.

Aroma: Funky yeast, a bit of spicy hops, tart citus notes, and a wonderful overarching bouquet of fresh lavender. Sniff too long and you might want to lay down for a nap.

Taste: On its own this would be fantastic young, dry saison, but the added ingredients take it to another level altogether. The essence of lavender is mellow but noticeable, helping smooth over some of the traditional funkiness you’d expect from a farmhouse ale, but without muting the yeasty complexity caused by using brettanomyces. The lemon peels adds a beautiful brightness that expands on the tongue. Altogether it’s an exceptional smooth and compelling spring/summer beer, especially for a traditionally tart-ish style not known for it’s smoothness.