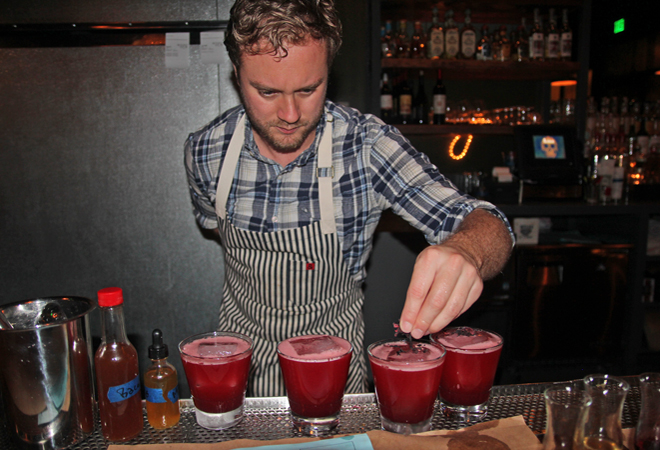 Chef Josef Centeno’s downtown restaurants Bar Amá and Bäco Mercat have finally gotten with the program—the cocktail program, that is. They’ve joined the growing number of restaurants who have decided to upgrade their cocktails to match the quality of their cuisine. A month ago, mixologist Brian Summers was hired on to overhaul the drink menus at both restaurants. “The food has such an incredible pedigree and they didn’t want it to just be a destination for food, they wanted it to be a place where you can enjoy a proper cocktail as well. The cocktails pull their own weight,” he said.

You might not recognize Brian but may be familiar with his work. He’s helped set up and worked at some of the best cocktail destinations in the city, including: Picca, Playa and Sotto with Julian Cox; Caña Rum Bar; The Bazaar; and, most recently, The Parish. Back in the day, he was on the opening crew for Comme Ça in West Hollywood and was trained by Sam Ross. And he even worked at Hollywood Roosevelt’s Library Bar in its heyday.

He’s a man in the shadows, not so much in the limelight like most of his colleagues. “I’m the Scottie Pippen at every bar I worked at,” he jokes.

Now Brian has upgraded the cocktails at the Centeno eateries, which weren’t horrible to begin with “but they weren’t memorable,” as he said. Personally, I loved Bäco Mercat’s “Inca Punch” cocktail and picked it for Los Angeles magazine’s Best Shrub Cocktail last year.

Brian’s new menu for Bäco will debut in a week and will feature six or seven cocktails. He won’t specify what they are but coyly says, “I’ve got a couple of tricks up my sleeve that I’m really excited about.” The ice program has also been improved with big ice and he’s reduced the shrubs to two or three. “Vinegar isn’t going to be the common denominator in all the cocktails.”

The drinks will be different for both restaurants. While Bar Amá’s are Latin-influenced with ingredients like tamarind and hibiscus, Bäco Mercat’s are more widespread as the cuisine there is more international.

Thanks to a background steeped in classic cocktails, Mr. Summers knows how to create flavorful but simple drinks. “One of the things I wanted to accomplish with this menu is building complex flavors but not having complicated drinks. Not a whole lot of steps is really appreciated in the middle of service. All the ingredients are liquid so we’re not having to muddle. So we got a lot of cool reductions. We do all the prep on the front end in the kitchen.”

If you get a chance, check out his most popular drink, the approachable “Blazing Saddles” with bourbon, Black Seal Rum, toasted chili and peach reduction, lemon, and fresh pressed peach. Or, if you’re a regular cocktail drinker, the “El Cartel.” “It’s got Sotol which has just come out in the States this year. It’s an agave distillate that gets smoked in the Earth like its cousin mezcal. It has a slightly smoky characteristic that’s beautiful in the ‘El Cartel’ cocktail. The Lillet and Aperol really balance it quite nicely.” Considering the ingredients, it’s surprisingly light. “I wanted something that would complement the food so I wanted something nice and light.”

You can catch Brian at Bar Amá on Wednesday and Thursday nights, and at Bäco Mercat on Saturday nights.