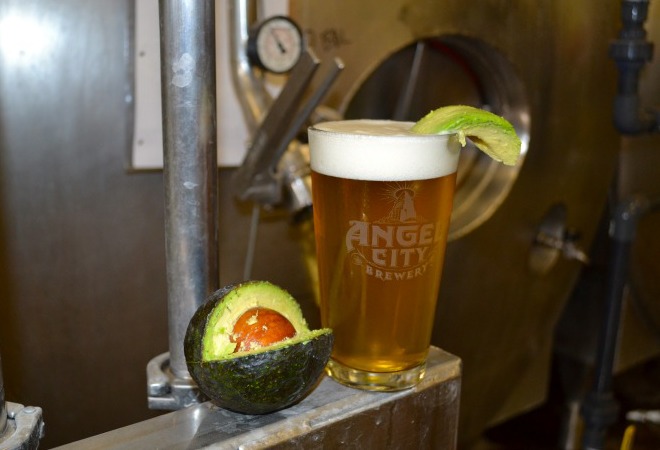 If you live in California, you’ll find any excuse to incorporate avocados into a meal. Pair it with beets, put it on eggs, smash it and spread it on a burger, slice it over a fried shrimp taco. We get the best bounty over here on the West Coast (really, have you ever tried an avocado in New York?), which is why it’s become something of a state icon. But what about avocados brewed in beer?  In case you’ve been living under a rock, the Golden State is also something of a mecca for craft breweries, spanning from San Diego all the way up to Petaluma. Combining beer and avocados would be the logical next step, right?

And that’s exactly what Head Brewer of Angel City Brewery Dieter Foerstner plans to do on August 17th, from 12 p.m. to 8 p.m., for the second annual Avocado Festival, featuring a specialty Angel City Avocado Ale available exclusively at the brewery’s Public House in the Downtown Arts District.

The Kolsch-inspired ale is brewed with a mixture of Haas and Suerte avocados from the Valley Center ranch of Foerstner’s grandma in Northeast San Diego, and includes fresh cilantro, garlic, crushed red pepper, and lime. In other words, the perfect beer to sip down with a side of tortilla chips. “I wanted to do something that was light in flavor because avocados have a delicate quality to them,” says Foerstner, who also said you’ll get a slight tickling of the tongue from the peppers.

In addition to live music, avocado-inspired art competitions, and a brewer-led tour of the Avocado Ale process, you can also check out food from Orange County’s Lime Truck, burgers from Son of a Bun, or avocado popsicles from newcomers Si Paletas.