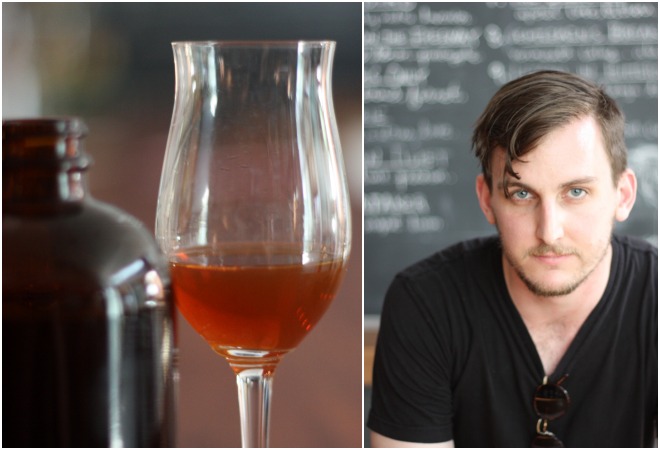 Bartender John Neumueller pulls a black shoebox out from behind the bar at Venice’s The Tasting Kitchen. It’s filled with dozens of tiny dropper vials, each labeled with various herbs like “Jamaican woodroot,” “cinchona bark,” or “chrysanthemum flower.” It’s an assortment you’d half expect to see populating a witch’s potion cabinet.

He pulls out one in particular, labeled “Gentian Root,” and squeezes a few drops onto the back of his hand. The taste can best described as soapy, and very, very bitter. That last part makes sense. Gentian root, a type of medicinal alpine herb, acts as an main ingredient in many bittersweet European liqueurs, often called aperitifs or digestifs.

From minty Fernet Branca to floral-sweet Chartreuse to caramelly Averna, all of them utilize some type of bitter root or bark—whether it’s wormwood, angelica root, cinchona bark, angostura bark, or quassia—to achieve their trademark flavor. If you want to make your own amaro (Italian for “bitter”; the plural is amari), soaking these pungent plants in alcohol is where you start. Granted, it’s not uncommon to find housemade tinctures (herbs steeped in high-proof alcohol) behind the bar at most craft cocktail outfits these days. They’re great for adding lots of flavor without adding much liquid volume. “Everyone and their mom is making them,” observes Neumueller. That same popularity goes for shrubs (fruit-vinegar syrups), cordials, flavored tonic waters, and housemade bitters, all of which are available ingridients at the Tasting Kitchen bar. But Neumueller and the rest of the bar crew are taking that alchemy one step further: they’ve been creating their own bitter liqueurs, or amari.

“It’s the next evolution of what we’ve already been doing.” says Neumueller. “These liqueurs are essentially cocktail bitters transformed into something that you can enjoy drinking on its own.”

The process begins by steeping various herbs and spices in Everclear. That mixture is then mellowed with a combination of water and sugar, and allowed to age for various lengths of time. The result is a bittersweet beverage (at or around 70 proof) that is perfect for sipping on after you’ve gorged yourself on pasta (Italians swear by amari for aiding digestion).

Here’s what to try first:

Neumueller is also making a not-so-bitter Aquavit-style liqueur flavored with caraway, dill, and citrus, as well as a cocoa nib liqueur, flavored with wild cherry bark, cinnamon, and vanilla, that latter of which is blended with cognac and whipped cream to create a stunning riff on the Brandy Alexander.

Although The Tasting Kitchen has been tinkering with their own liqueurs for almost a year, it’s largely gone unadvertised. Rather than put it on the menu, Neumueller and his fellow bartenders are more likely to pour a sample for diners hanging around the bar post-meal. “It’s a great way to open customers up to the vast culture of amaro,” says Neumueller.

Next time you hit up that stretch of Abbot Kinney, ask one of the bartenders for a pour of one of their housemade liquers ($9-10). They’ll know what’s good. The cult of amaro is always looking for new converts.