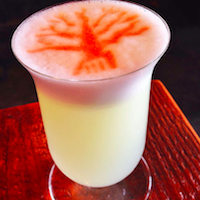 Fans of the nearly decade-old Peruvian restaurant Los Balcones del Perú in Hollywood will get one last chance to enjoy its old menu this weekend before it debuts its brand-new one next Wednesday, February 26. And what makes the last hurrah before the new menu debut even better? Good, hard booze. You can now enjoy a taste of Pisco alongside your pescado sudado. The redone restaurant, which is now going by the more streamlined name Los Balcones, has acquired a full liquor license and with that a craft cocktail program created by Marcos Tello and Garrett McKechnie for the Hospitality Collective.

The two barmen, whose style is steeped in historical classics, have made a point to complement the restaurant’s celebration of Peru in two ways: Classics are classic cocktails made with Pisco and Originals are made with Peruvian ingredients. The 12 cocktails are priced at $12 a piece.

Here you’ll find the best Pisco Sour, which is the one that you build yourself. “You can choose your own Pisco, your own bitters. We’re starting with a few tinctures and bitters you can use with it and moving on from there,” said Garrett. And he assures me there’s no way you can make a bad Pisco Sour, like you can, say, make a not-good Manhattan. “With the Pisco Sour, as long you’re sticking with your citrus and a pisco you’re just going to get a different flavor. The Italia is going to be light and floral and bright, whereas the Quebranta has a more mineral earthiness to it. All of our servers will be able to lead people through it.” Thank goodness for that.

The list of piscos is 30-long, making it one of the most extensive “compared to anywhere except for Picca,” said Garrett. But even with all the research and Marcos taking a trip to Peru, it turns out that the boys could have just asked the Rodriguez brothers for tips. “The Huamani is a cool brand of Pisco and their distillery and vineyard is down where [Los Balcones owner] Jorge and his brother lived, so they know the people who make it. So we were bringing in all these piscos that we thought we had discovered and they were going, ‘I know that! I know the guy who makes it!’”

For those not savvy to the different brands and varietals of pisco, in the near future you may be able to do flights to get acquainted with the nuanced differences of this intricate spirit.

To keep the bar program in line with Los Balcones’ call for Peruvian authenticity, Marcos and Garrett not only searched for the best mom-and-pop imported pisco out there but also native ingredients. “We did a ton of research on the Amazon and all the different ingredients that come out of there,” said Garrett. “We found interesting fruits that you can’t get here. But there are certain things that we can only get as a pulp.” These will be showcased in the “Originals” cocktails.

Here’s a look at the complete menu.

CLASSICS: “We wanted to make them simple. We played with them for a long time and just found our favorite recipe.”

Build Your Own Pisco Sour: You pick the Pisco and bitters, they’ll mix in the rest. This cocktail will be stenciled with one of four different designs of Nazca lines.

Chilcano de Anis: The house cocktail of one of Lima’s finest cocktail bars, Malabar. Pisco, ginger, lime, and absinthe. “We used Emperor Norton’s Absinthe which is produced in San Francisco. Emperor Norton was a character in San Francisco right around the time of the Pisco revolution up there. And he was a wild character that people would actually travel to see. There’s a history element to it and it’s also an absinthe we just love.”

Canario: A Peruvian take on a screwdriver made with Pisco, mandarins, and pineapple.

ORIGINALS: “We took the basic spirits like bourbon or rye and wanted to mix them with Peruvian ingredients so there’s something for everyone.”

Cacao-Fashioned: Cacao Butter fat-washed bourbon, yacón syrup, and Fee’s Old Fashioned Bitters. “We took Buffalo Trace and did a fat wash with Peruvian cacao butter and it was amazing. We completely freaked out on it. It gives a little texture to it but it strains completely clear. We use Fees Old Fashioned Aromatic bitters and yacón syrup to sweeten it, which is a root we used at Feed way back when. It’s really sweet and it’s all the rage now because it’s a pre-biotic sweetener. Doesn’t spike your glycemic levels. It’s exactly what we wanted to do.”

Guanabana Swizzle: English Harbour, 5-Yr Jamaican Rum, Pierre Ferrand Cognac, Guanabana Syrup (guanabana pulp with demerara), lime juice, allspice. “It has a lot of flavors like banana, strawberry and coconut when you just eat the pulp. It’s garnished with edible floral confetti. It’s a tiki spin with fruit, spice and a fun quality to it.”