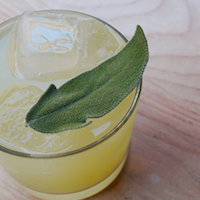 Last night downtown L.A.’s Fifty Seven kicked off its dance of rotating chefs with opening chef David Nayfeld (formerly of NYC’s Eleven Madison Park). Cardiff Giant’s unusual restaurant concept in the Arts District will bring in out-of-town chefs who will take command of the kitchen for a limited time. But even though the chefs will change regularly, head bartender Jeronimo Medina (The Foundry, Las Perlas) will stay put (along with the restaurant team), collaborating with each chef on seasonal cocktails made with fresh and housemade ingredients, that supplement their food.

With chef Nayfeld, it helped that the two had a similar palate. “[Nayfeld] has a good knowledge of cocktails and likes them. He once told me that he liked cocktails before he liked food,” said Jeronimo. “The way we built the wine list and the cocktails, we want to have an accent of acidity in them to complement the food.”

Together they created drinks that “are extremely unique, rare, mysterious.” How so mysterious? “You taste them and might think it’s one thing but it’s something else,” said Jeronimo. “For example on the Rusty Beam, a lot of people were surprised that it’s a tequila drink and mezcal. People think it’s bourbon. With the 3 Sheets, people take a sip and it leaves them wondering. You find something new with every sip you take and it keeps you thinking.”

Naturally the cocktails will set off the food but, Jeronimo says, will also work as standalone sippers to enjoy in the restaurant’s cozy downstairs performance space. The opening menu will feature 12 drinks ($12 to $15) with almost every spirit represented. Here are a few with Jeronimo’s suggestions for how to best enjoy them.

El Sanguinello: Jalapeno-infused Pierde Almas Mezcal, Averna Amaro, agave, blood orange, lemon, Sal de Gusano. “[Chef and I] both like spicy, we both like smokey, we both like citrus, and that cocktail would balance out almost any dish because of its acidity.”

Rosemary Clooney: New Amsterdam Gin, soda water, rosemary lime syrup. “The Rosemary Clooney is a take on a Tom Collins, so you have your citrus notes in your face, the herbal notes.”

Chef Nayfeld will stay on through July/August as will this list of cocktails.