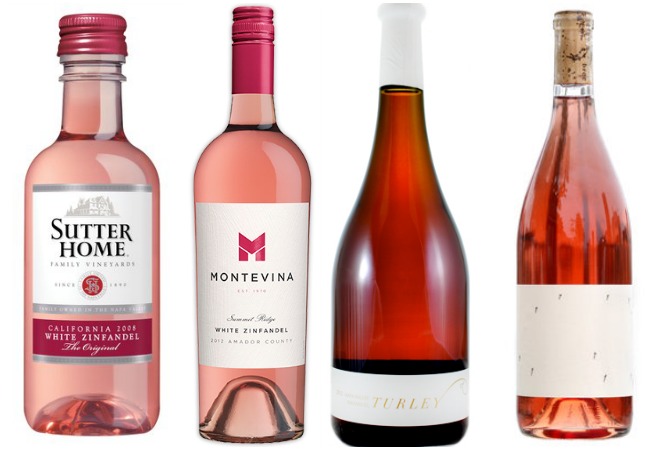 Cheap, sweet, and easy to chug. For decades, that’s been the reputation of white zinfandel—the pink-colored “jug wine” for people who don’t really like wine at all.

But does this misnamed style of rosé wine made from zinfandel grapes—which otherwise produce a bold, spicy red wine—really deserve such a bad reputation?

Let’s look back at the history of white zinfandel wine making to see where things went awry.

Zinfandel was first made into a rosé, or blush wine, in 1869 by El Pinal Winery in Lodi. The resulting product was pretty well-regarded, so much so that the California viticultural commissioner of the day advocated the use of zinfandel as a white wine grape as well as a red.

Flash forward to the 1970s, when Sutter Home Winery was producing “premium” Napa Valley zinfandel red wines. The winemakers would usually “bleed off” some of the grape’s excess juice to increase the concentration of tannic compounds on the red wine. This leftover juice would be then fermented in a dry-style wine that was labeled “white zinfandel” (thought it was technically a rosé). Both of these practices were fairly common in the California wine industry at the time.

But in 1975, one batch of white zinfandel didn’t fully ferment by accident, resulting in a lower-alcohol wine with a larger amount of sugar. After sitting around in a jug for a few week, winemakers decided to bottle and sell the sweet stuff anyway. It became an overnight best-seller.

The rest as they say is history: cheap, sub-$10 bottles of white zin became a cultural staple thorugh the 80s and 90s, oftentimes served on the rocks and colloquially dubbed “Cougar Juice.” It outsold regular Zinfandel 6-to-1 and was at one time the third most-popular wine style in the country by volume. These days the pink stuff still sells around 10 million cases annually. (Ironically, the success of white zin helped save thousands of acres of old-vine zinfandel which would have likely been ripped out).

But the story isn’t over yet.

Recently, a few California winemakers have been reviving the style of dry white zinfandels that existed before Sutter Home’s fortuitous (or unfortuitous) mistake. These vibrant low-alcohol rosés are delightful for summer—crisp and refreshing, but imbued with the lush and ripe berry flavors of the Zinfandel grape. They’re low-alcohol too, equipped with enough residual sugar to drink as an aperitif, but also complex and acidity enough to pair with food.

Here a few bottles you should seek to out to experience this revitalized style, if you can find them.

2013 Turley Wine Cellars ‘Napa Valley’ White Zinfandel ($18)
Sales Director Christina Turley, a former Momofuku beverage director, has been increasing the output of this dry, low-alcohol wine since introducing it in 2011. It’s emerged as something of a cult favorite on hip wine lists acros the country and although its tough to find a bottle at wine shops, you could always make the drive up to Turley’s Paso Robles tasting room.

2013 Broc Cellars White Zinfandel ($23)
Another exciting new-school California winemaker, Chris Brockway is rediscovering the merits of Zin with wines like his bright, fruity and slighty minerally white zin, which he produced for the first time this year. Only 135 cases were made, so you’ll probably have to want until next spring when California rosés are usually released.

2012 Montevina Amador County White Zinfandel ($7)
The Montevina family has been making white zinfandel for decades, but recently their tangy, dry-style wine turned heads by winning a gold medal at the 2013 L.A. Wine & Spirits Competition. For a summer picnic, it’s a great low-cost find that pairs well with cured meats and fresh seafood.

Correction: A previous verison of this story incorrectly stated that Turley Wine Cellar’s Tegan Passalacqua was a former Momofuku beverage director. We regret the error.