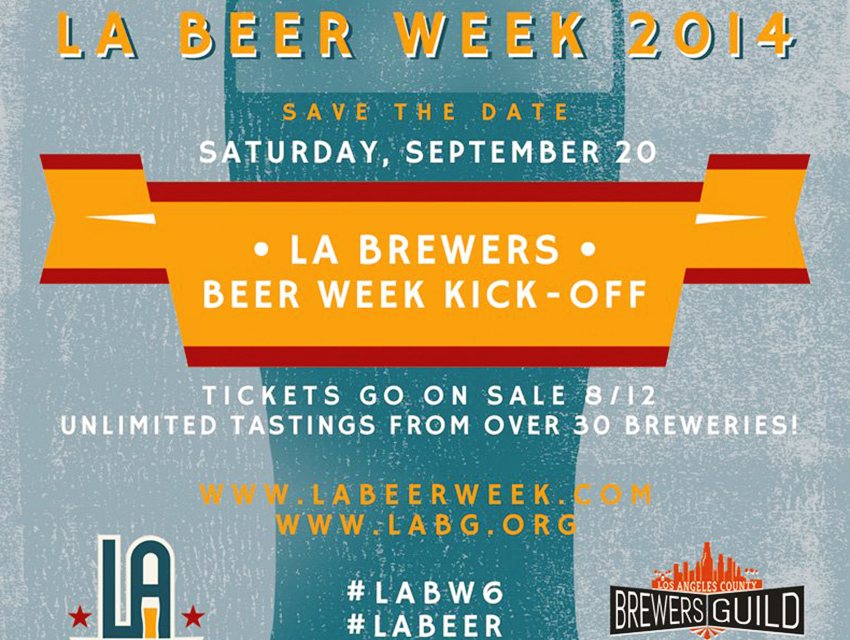 I know what you’re thinking. Isn’t every week in Los Angeles beer week? Well, yes. But for one week every year, the Los Angeles County Brewers Guild puts a ring on it and hosts a series of official events that highlight all that is good about LA beer culture.

And the events, THE EVENTS. They are myriad. But we’re here to help. The following are five LA Beer Week events that you should not miss.

Top of the list was going to be the amazingly-stocked-with-local-brewery-offerings Kickoff Fest. Alas, the Chinatown party is sold out. Bully for you if you scored tickets. Single tears for those of you who didn’t. So. Our first must-hit stop of the festival is Mohawk Bend’s weeklong, local beer love fest. The Echo Park bar and restaurant will be slinging flights from Los Angeles County Brewers Guild members from September 20 to 28. It’s a great way to get familiar with your friendly neighborhood brewery. And Mohawk Bend offers delicious menu items to wash down the brews.

Beer and music have always gone hand in hand. And in honor of LA Beer Week, brewmasters from all over the area are shedding their day-job aprons and applying glam-rock eyeliner all for the sake of your entertainment. Eagle Rock Brewery hosts the first annual Battle of the Beer Bands at the Bootleg Theater on September 22. There will, of course, be beer. But the main event is a music throw down between some of the best breweries in Southern California: Stone, The Bruery and LA’s own Eagle Rock to name a few. Tickets here.

Things that are roughly analogous to The Bruery and Almanac Beer Company joining forces for a tap takeover at Beer Belly: 1. Chocolate and peanut butter teaming up in candy form. 2. Channing Tatum and the dude from True Blood joining forces to make a male stripper movie. 3. Tom Izzo and Mateen Cleaves working together to secure the 2000 NCAA basketball championship for my beloved Spartans. The beer list at this Beer Belly event is stellar. Some of my favorite sours from Almanac will be a-pourin’—Dark Pumpkin Sour and Dogpatch Strawberry will both make appearances. And The Bruery options are just as exciting—Oude Tart with Cherries and Hottenroth. Just go. I’ll see you there.

You guys, it’s beer and ice cream. Just let that one sink in for a moment. Beer AND ice cream. Because life is beautiful and full of wonder. The fantastic Gelateria Uli Downtown is teaming up with Almanac Beer Company (you may remember them from such hits as the event listed right before this one) for a day of beer infused gelatos and sorbets. Just one of the limited edition delights: a sorbet made with Almanac Farmer’s Reserve Citrus, a barrel-aged sour beer made with bergamot oranges. BEER ICE CREAM.

Close out another great L.A. Beer Week not by gnashing your teeth and rending your garments, but by toasting two of the best breweries in the county. Glendale Tap is hosting a takeover by Torrance-based breweries Monkish Brewing Company and Smog City Brewing Company. Beers like California Love (Smog City) and Arrivant (Monkish) will be sharing space in your heart and tummy for the evening. And after you’ve put this most hallowed of weeks to bed, it’s up to you to keep the dream alive. Only you can make every week an LA beer week.