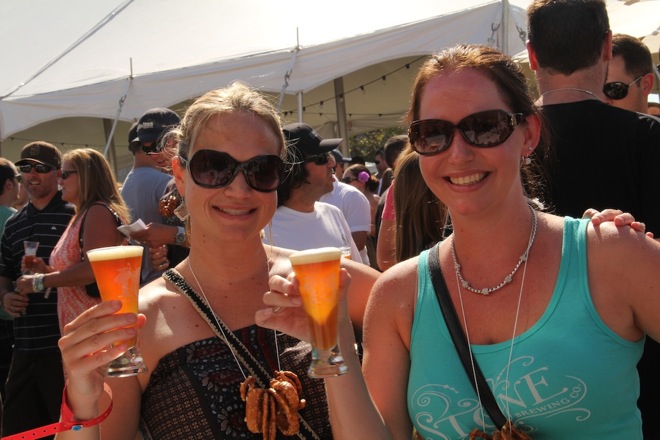 Craft beer folks know how to celebrate a momentous occasion: with great beer and plenty of it. And when they’re ringing in their own milestones, you can always expect one heck of a good time. Here are a few upcoming anniversaries in the craft beer world that you won’t want to miss:

Beer Paper L.A. 1st Anniversary Party
Long Beach, May 7
This one is going down tonight! Beer Paper L.A., a great go-to source for local brews news, is lighting its first candle and pouring a dizzying line-up of special release beers. Peruse their newest issue while sipping on a glass of Tovarish Imperial Espresso Stout from Long Beach’s acclaimed Beachwood BBQ & Brewing—where the event is being held—or any of the other 24 beers on tap from 20 of SoCal’s best craft breweries. One lucky attendee will also win a pair of tickets to the sold-out Firestone Walker Invitational Beer Fest on May 31. More information.

The Bruery 6th Anniversary Party
Anaheim, May 10
It’s hard to believe that O.C.’s craft beer darling, The Bruery, is already turning six years old. (Fun fact: This was the first brewery I ever visited, just a few weeks before they opened their doors. How time flies! ) While their anniversary celebration is only open to members of their exclusive Reserve Society and Hoarders Society, all public patrons can enjoy their commemorative sixth anniversary beer—an English-style old ale called Sucré that weighs in at a burly 16.5% alcohol by volume—in bottles and on draught at better beer retailers around town. More information.

Smog City Brewing 1st Anniversary Party
Torrance, May 17
The South Bay has seen a boom in craft brewery openings in the past few years, and Smog City Brewing has proven to be one of the most successful. Although they started brewing out of the Tustin Brewing Co. facility in late 2011, their own space didn’t open until last May. At their anniversary party, twenty beers will be on tap, including the aptly named Anniversary Beer, a strong saison brewed with merlot grapes, and Quercus Circus, a sour barrel-aged Belgian-style blonde ale. More information.

Stone 18th Anniversary Celebration & Invitational Beer Festival
San Marcos, August 15-16
This one’s a little bit further out on the calendar—and farther out on the map—but North County San Diego’s Stone Brewing Co. consistently makes their anniversary celebration one of the largest and best craft beer festivals in SoCal. Over 60 breweries from around the world will be pouring their goods, with all proceeds going to charity. All-access passes are already sold out, but tickets for the morning and afternoon sessions are still available, as are tickets for the VIP brewers reception taking place the night before. More information.

An Investigator Claims the O.C. DA Sabotaged the Robicheaux-Riley Case

Inside a Judge’s Controversial Crusade to Solve Homelessness in L.A.