Home Uncategorized The Silver Tongued Devil And I: The Playlist 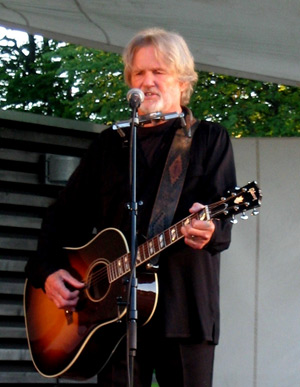 “Sunday Morning Coming Down” (1970)
Kris’s breakthrough song—hands down the best song about the bleakness of a Sunday when you are lonely and hung-over. Ray Steven’s recording of it was the most attention anyone had ever paid to one of his songs, and Johnny Cash’s version launched his career.

“Help Me Make it Through the Night” (1970)
A perfect illustration of songwriter Marijohn Wilkin’s comment that Kristofferson’s songwriting took country music into the bedroom.

“Me and Bobby McGee” (1970)
“Freedom’s just another word for nothin’ left to lose” is probably one of the best lines ever written. At the time, the song appealed to the hippies and the country folks alike. Janis Joplin’s only Number One song.

The Silver Tongued Devil and I

“For the Good Times” (1970)
A sad song written at a sad time in his life, struggling to be a songwriter and paying the bills by commuting to the Gulf of Mexico from Nashville earning a living as a helicopter pilot.

“Loving Her Was Easier (Than Anything I’ll ever do again)” (1971)
The imagery was straight out of a trip to Peru­— the song about more than just one woman.

“The Pilgrim – Chapter 33” (1971)
He and a several friends around him were 33 when he wrote it— hence the title. The lyrics about poets, pickers, prophets, and pushers were both autobiographical and about many of his heroes at the time.

“From the Bottle to the Bottom” (1971)
The title says it all— it comes from the time he hung out and worked at the Tally Ho Tavern in Nashville.

“Please Don’t Tell Me How the Story Ends” (1971)
Another melancholy look at love. Any version you hear will get you, but check out his own demo of the song on the tribute cd The Pilgrim: A Celebration of Kris Kristofferson.

“Why Me” (1972)
Kristofferson’s only major hit as a recording artist, it’s a song about needing help, and gratitude. He felt it was probably the most serious, sincere song he ever recorded.

“I’d Rather Be Sorry” (1974)
A line Kris thought of whenever he had a tough decision to make.

“You Show Me Yours (And I’ll Show You Mine)” (1976)
If you’re feeling salty I’m your tequila / If you’ve got the freedom well I’ve got the time/ There ain’t nothin’ sweeter than naked emotions /So you show me yours, hon and I’ll show you mine

“This Old Road” (2006)
A wistful look at the faces passed and the road traveled to get to this point in his life.

“From Here to Forever” (2009)
He wrote it for his kids. It will mean the world to them for the rest of their lives.