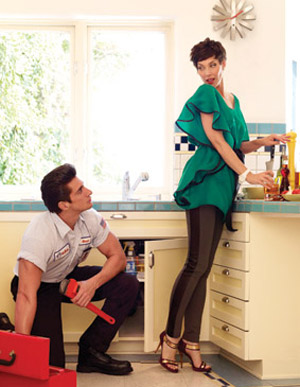 We’ve all been stuck behind their trucks on the freeway or waited at home all morning for them to arrive, but Los Angeles delivery, maintenance and repair men were a little hard to find when we cast them as supporting players in this month’s fashion spread. Photographer Albert Sanchez laid out the scenario as if they were scenes from a ‘50s melodrama. Our housewife (her character’s name was Mitzi) spends her days lounging around her 1920s Spanish house, all dressed up with nowhere to go. The men she encounters represent iconic Los Angeles companies. We love the outlandish trucks of Dy-Dee Diaper and George Brazil, but neither firm was available. Same goes for Adee-Do and Jack Stephan—it’s impossible to find a plumber in this town! We struck deals to work with Western Exterminator, Anawalt Lumber, and Union Ice, but their film ended up on the cutting room floor. Actors portraying the fine men of Sparkletts, Mr. Rooter of Sun Valley, and Forest Green Tree Service now grace our pages and we know who to turn to the next time we’re thirsty, blocked, or overgrown.

Here’s some additional information on the corporate costars of House Calls:

The original office of Sparkletts water is a domed Moorish building in Eagle Rock. It sits atop the natural aquifer that has supplied their water since 1925. The oasis, just off York Boulevard, is where bottles are recycled and those iconic green delivery trucks come to be refilled for another day out on the road “making friends.”

Henry Bravo has been pruning trees and keeping yards tidy since he was in elementary school tagging along with his landscaper dad. He started Forest Green tree service eight years ago and is a certified arborist and a member of the International Society of Arborculture. His 20 employees shape, trim, and fertilize gardens from San Diego to Ventura. Bravo reports that treehouses are almost extinct in L.A., but that he still gets calls to rescue cats from upper branches.

Mr. Rooter, with their distinctive cartoon mascot, is one of the largest drain clearing and plumbing companies in the world, working under sinks for over forty years. San Fernando Valley plumber John Akhoian brought a franchise to Los Angeles in 1996 where their red trucks fit right in.When we sent them a photo of our model to use for an ID badge, the woman who received it said, “He doesn’t look like any of our plumbers.” She followed up with, “Is he single?”