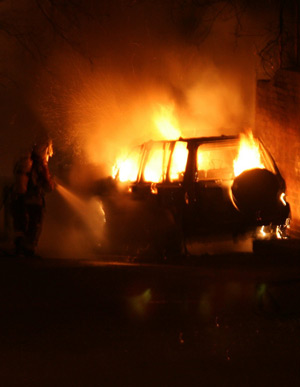 On Thursday, September 10, a panel of three federal judges from the 9th circuit reversed their decision back in February to deny the appeal of Caltech grad student and Asperger’s sufferer Billy Cottrell, who was found guilty of the environmentally-motivated fire-bombing of several SUVs at dealerships in the San Gabriel Valley. Judges never take great pride in being flat-out wrong, and it wasn’t too surprising that, in overturning his arson convictions, the panel’s “Amended Memorandum” was earmarked “not for publication.”

The majority wasn’t inclined to take everything back. Despite a diagnosis of Asperger’s syndrome by a leading medical expert, the judges still ruled that Cottrell’s disability should play no role in determining his guilt in being part of a conspiracy. Citing precedent, they concluded that only a “gross and verifiable” impairment, like blindness, could enter into that equation, but that, “a condition like Asperger’s, which affects only the defendant’s ability to draw inferences from facts he perceives, does not qualify.” Strange distinction this is, since many Asperger’s sufferers, so rigid and so unable to take things any way but literally, would be as hard-pressed as a blind man to gather the significance of a conspiratorial wink or nod.

To its credit, the appeals panel changed its earlier ruling on Cottrell’s arson convictions. The prosecution offered two theories about his participation in the fire bombings—one had him lobbing Molotov cocktails himself; the other had him aiding and abetting the mayhem of his co-conspirators, Tyler Jackson and Michele Oe, who have yet to be apprehended. (Cottrell never acknowledged doing anything more than spray-painting and blamed the fires on the fugitives.) With the arson charge, the judge should have disallowed testimony about Cottrell’s Asperger’s, but for aiding and abetting, the defendant’s possibly impaired state of mind was evidence that needed to be heard. Since the jury didn’t specify which prosecution argument swayed them—arson or aiding and abetting—the appeals court assumed that they could have chosen the latter. So the panel overturned the arson convictions and set aside the entire sentence, both conspiracy and arson. The U.S. Attorneys Office now has to decide whether to again bring Cottrell before the dock, though he’s already served two-thirds of his sentence.

For almost a decade before Cottrell’s apprehension, radical environmental activists like the Earth Liberation Front, or ELF, had committed brazen acts of destruction, and neither the FBI, the Bureau of Alcohol, Tobacco, and Firearms, nor the federal justice system apprehended a single culprit. As I watched the proceedings unfold in court for “The Accidental Ecoterrorist,” a feature I wrote for this magazine, it became clear that neither Cottrell’s Asperger’s, nor his genius—he was one of Caltech’s most promising theoretical physics students before he was apprehended—could dampen the thrust of his prosecution. (Sympathy for his developmental disability seemed in short supply. When I brought up the subject of Asperger’s, I remember one of the U.S. attorneys working on the case sneering at the whole notion of this “poor little autism boy,” as he put it.)

Cottrell certainly didn’t fit the radical environmentalist profile. Friends and family hadn’t observed in him any overwhelming desire to save the earth, but they did notice a puzzling impulse for self-sabotage. Cottrell had grown used to being punished by authorities throughout his adolescence for his erratic behavior. Despite his peerless ability to synthesize solutions to complex problems, he made an awful alleged ecoterrorist, since he lacked any capacity for self-preservation. He talked about his participation in the crimes to friends and acquaintances, who soon enough told federal agents everything they wanted to know. He also didn’t bother going off-campus to engage the media. He used a Caltech library computer to send the L.A. Times a series of e-mails about the arsons, even though the most remedial systems maintenance person could trace them to his student login. At trial, his demeanor on the stand was so off-putting—awkward and tone deaf—that jurors, who were barred from hearing testimony about his disability, could interpret it only as defiance.

When I visited Cottrell in jail shortly after the trial, he acknowledged that, having suffered through reform schools and freezing mountain boot camp and other humiliations and hardships for his rigidity, his temperamental estrangement, and his freakish intelligence, he wasn’t comfortable with having made it out the other end, at one of the world’s great scientific institutions no less. Self-sabotage had become as natural and necessary as breathing.

From San Luis Obispo to San Diego and deep into the Mojave, the federal government had prosecuted maybe a couple of arson cases in the decade before it convicted Cottrell—and in those cases, unlike Cottrell’s, victims had suffered and died. Of course, 2004, the year Cottrell picked to attack some SUVs, was one of the most inflammatory in the war against terror. In a recent book Tom Ridge, who was Homeland Security Secretary at the time, wrote that the Bush administration pressured him to crank up the terror alerts that year in advance of the president’s reelection. Both the government and some in the media had begun conflating environmentally-motivated property damage with the kind of diabolical terrorism that leveled the World Trade Center. Besides, Cottrell had given federal prosecutors a unique opportunity to finally bring a radical environmentalist to justice, even though the physics student at the defendant’s table was nothing of the sort.

Thom Mrozek, spokesman for the U.S. Attorney’s office, says Cottrell will remain in prison as the federal authorities sort out their options, that the conspiracy sentence may ultimately stand, and it will be up to a judge to determine if Cottrell has already served enough time.

What would a 2009 or 2010 retrial look like? It’s been some years since the last spectacular Earth Liberation Front assault on the despoilers of the planet, and all the jeremiads those reckless acts routinely spawn. The American public—the pool from which any jury must be siphoned off—is much more attuned to political manipulation of the terrorist threat. There is also a great deal more awareness and concern about Autistic Spectrum Disorder—of which Asperger’s is a part—as the rise in new cases approaches epidemic levels. Even if Cottrell is dragged into court for a second prosecution, he stands a much better chance of winning an aquittal this time around, at least if he can restrain his troubled psyche from doing himself as much damage than any he may have once inflicted on those SUVs.