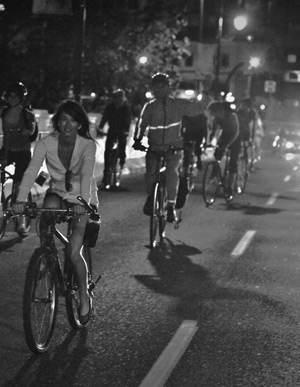 On November 2, Dr. Christopher Thompson, a 60-year-old former emergency room physician, was found guilty of driving past two cyclists on Mandeville Canyon Road and slamming on his brakes. One cyclist glanced off the car, separating his shoulder; the other crashed face-first through the car’s rear window, breaking teeth, receiving cuts to his face, and fracturing his deeply lacerated nose. The incident, which took place on July 4, 2008, drew widespread attention from cyclists, many of whom complain of routinely being endangered by drivers. Plenty of drivers sided with the doctor, citing the unsafe riding practices of bicyclists.

Convicted for assault with a deadly weapon and mayhem, among other charges, Thompson could go to prison for ten years when he is sentenced on December 3. While his case is extreme (Thompson had been accused by other cyclists several months earlier of pulling in front of them and hitting his brakes), it underscores the animosity between the cyclists and motorists. With more people pedaling the streets—whether for exercise, to reduce pollution, to save money, to have some fun, or just to look cool—those tensions aren’t likely to dissipate anytime soon.

Executive editor Matthew Segal wrote about rise of bike culture and the challenges it poses both to motorists and cyclists in his January 2009 feature “Spokes People.”