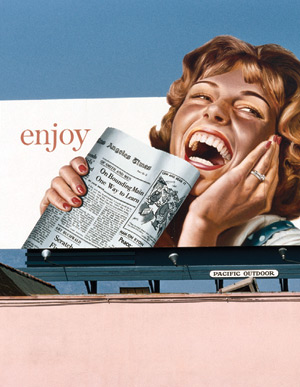 In the June issue, Los Angeles ran “Sign Language,” a photo-essay featuring billboards from the 1950s and 1960s. The images of the advertisements came to us from photographer Gary Leonard, who had received a cache of archival Kodachrome slides from Pacific Outdoor Advertising. Leonard is presenting nearly 100 of the images in an exhibition titled “The Billboard Show” at his new downtown gallery, Take My Picture. Beyond vividly documenting a bygone era in a bygone Los Angeles (on what will soon be a bygone type of film, now that Kodak is discontinuing its Kodachrome line), the shots were captivating for their mystery: They came with almost no background documentation. Then, shortly after the June issue hit the stands, we received a letter from Judy Jacobsen:

“When I saw the article titled ‘Sign Language’ and looked at the adjoining photos, I thought, Boy, does that bring back memories. I turned the next page to see a picture of myself holding the L.A. Times, and I couldn’t believe my eyes. I was 24 years old in 1961, and the photo shoot was held at Phil Fahs’s studio. I am 72 years old now and certainly never expected to see any of those billboard ads again. Thank you for bringing back some pleasant memories from long ago.”

Jacobsen was a model living in the Mid-Wilshire area at the time she posed for the photo that became the basis for the ad’s illustration. “The idea was that the Times were so funny, I just had to laugh,” she explains. Jacobsen remembers seeing the billboard on Wilshire. “You’re driving by and you look up, and you’re just astounded,” she says. As for the likeness, she’s got no complaints. “It was very representational of how I looked,” says Jacobsen, who provided us with shots from her modeling days—and one from 2004. Not long after the Times ad, Jacobsen left modeling behind to become a mother. Living in Camarillo these days, she made sure to get copies of the magazine to show her three daughters, who had a little difficulty at first trying to connect the woman they know as Mom with the one who existed before they were born. “They went, ‘Oh my God!,’ says Jacobsen. “They were so surprised.”