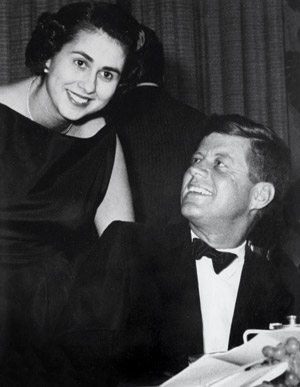 It happened in September. We were organ­izing Women for Kennedy, with their funny hats and eve­rything—I hated it, actu­ally; it was just so sexist back then—and we were having a fund­raiser. We were very concerned, because this had been Adlai Steven­son ter­ritory beyond belief. The activists were all for Stevenson. Would they come? I got the idea that if we held it at a celebrity’s home, maybe some people would be interested. Janet Leigh agreed to let us use her yard. She was married to Tony Curtis, and they were the sweet­hearts of Hollywood.

Maybe, if I could put a show together, more people would come. So I went to Frank Sina­tra and said, “Frank, would you sing?”

Janet didn’t want us to hold the fundraiser in her house, but she agreed that who­ever came could walk through it so they could see it and then go on out into her back yard. Janet and Tony agreed to about 300 people. I told Janet that if we had 300 people, it would be incredible. I thought I could get only about 100, to tell the truth. Their house was near Pickfair, the famous place that Doug Fair­banks and Mary Pickford had up above the Beverly Hills Hotel. I knew that parking would be awful up there. In those days, you could get permission to use one side of the street, so we hired a valet service, and they said, “We’ll make it work.”

We charged next to nothing to attend. I can’t remember what it was. In those days, you probably charged $50. To get 300 people, I figured I had to send out 3,000 to 4,000 invitations. Everybody said, “God, it’s all Stevenson. Nobody is into Kennedy yet. It’s too soon.” Teddy was out here in L.A., and he was a wreck. He didn’t think we could do it. I’ll always see him shaking his finger at me. The first day of return mail, we got 100 people. I said, “Well, I guess they’re the people who care about Kennedy, and that’s probably going to be it. We’ll have to work hard for the next 100. We’ll have to get on the phones.” Remember, I had promised Janet on the Bible that we wouldn’t have more than 300, and 300 people, I figured, would be phenomenal. Tony didn’t care. He was, you know, “Whatever Janet wants.” On the second day that the mail came in, we had the 300, and there were many more days to go. I thought, “I can’t tell her.”

Even then, though, I figured the total would be only a little bit over 300. I thought that I had everybody who cared. But I was shocked that I was getting that many people so quickly. And the mail just kept coming. Now I was up to 500, and the parking guy says, “Roz, we can’t handle this. It’s out of control.” We went down to the Beverly Hills Hotel and made arrangements to have people park there and to bus them up the hill. I could pay for it, because now I’ve got so many people coming that I’m ahead al­ready. I’m seeing a big profit. But I still haven’t told Janet. It was scary. In politics, you can’t tell people, “You’re invited, but you can’t come.” What do I do? Edna Mosk, the wife of Stanley Mosk, then the state attorney general, was in real estate. She was a leading woman on the West Side, and we were very close friends. I said, “Edna, I’ve got a prob­lem. Do you by any chance know who lives next door to Janet Leigh.” She got out something that real estate people use, and we found out who lived next door. Nobody knew who the man was. I said, “We don’t even know if he’s a Democrat or a Republi­can.” Edna said, “Well, what the heck, Roz, you’re a city official. I’m the wife of the at­torney general. Why don’t we—why don’t you call him?”

So I called. His name was Jo Van Runkle. I said, “Mr. Van Runkle, this is Roz Wy­man. Could Edna Mosk—you may know the name (I was hoping)—would you let the two of us come visit you?”

And he said, “What’s the subject?”

I said, “Well, it’s kind of a neighborhood problem.” I didn’t want to tell him what it was. I said, “Mrs. Mosk is in real estate.” He probably thought we wanted to buy his house.

We went up to see him. He was a lovely man, a very elegant kind of guy, a bache­lor. I told him what was going to go on next door, and he probably thought I was just be­ing polite and warning him about the disruption. Then I said, “Mr. Van Runkle, what I need is the use of your yard. I have so many people coming that Janet’s and Tony’s yard can’t hold them.”

He looked at me like I was crazy. He said, “I’m a Republican.”

He called me the next day, and he said, “I’m crazier than you are. I’m going to let you do this.”

I said, “Maybe, now that you’ve said yes, I should lay out in more de­tail how it will work.” I wanted to break down the brick wall between his house and Janet’s house—make a path through the wall so I could take the people through Janet’s house, walk them through Janet’s yard and into his yard.

He said, “You’re going to do what to my brick wall?”

And I said, “Well, Mr. Van Runkle, it will work better that way.”

He looked at me for a long time.

He kept looking at me like, “Are you out of your mind, lady?”

But he let me do it. He said, “My yes is provided on one thing. I’ve never met Tony and Janet. I would like to meet them. That’s the condition.”

Now I had to tell Janet, and she looked at me as if I were crazy. I asked her to please have brunch, or lunch, or dinner, or something with Jo Van Runkle. “I’ll pay for it,” I said. “Anyplace you’d like. But he really wants to come to your house. So get the fin­est help for the occasion and serve anything you’d like, and I’ll pay for it.” By now we had almost 1,000 people coming to the fundraiser, and we still had several more days to go. I could see maybe 1,000 coming, or a few more. I said, “Janet, it’s out of control. It’s just unbe­lievable. Honest, in all my years in politics . . . ”

Then she said, “Do you think you can pull it off?”

She said, “I think you’re right. It will work if you have his yard.”

The head of the bricklayers union was a friend. Most of the labor people in L.A. had become friends of mine, and they were great. The day before the event, they took down an eight-foot wide section of the fence, big enough so people would have no trou­ble going through it. They did it very carefully.

Mr. Van Runkle’s yard was lower than Janet’s and Tony’s yard. My husband, Gene, who was a wonderful lawyer, kept saying, “You’re going to have a lawsuit. You’re going to have a lawsuit.” So the bricklayers built two steps on Mr. Van Runkle’s side. I remember saying, “Let’s not have small steps. Let’s make it pretty wide.” The bricklayers would do anything I wanted. And we got some Young Democrats to stand at the steps. That way nobody would fall.

Originally Frank Sinatra was going to sing in the afternoon. But now that we had two yards, I had to get him to sing twice, once in the morning, as well. I said, “Frank, you have to do two shows. And Frank, one of them is at 11 o’clock in the morning. The way it’s set up, you may have to stand on the diving board of Janet’s and Tony’s pool. It’ll be the best way for everybody to see you.”

Frank never went to bed until the sun came up. Nelson Riddle, his arranger and con­ductor, said, “Frank’s going to sing at 11:00 in the morning? I usually put him to bed at that time.” But Nelson was great. He said he would help. “I’ll put together a little combo so Frank will be comfortable.”

Frank said, “I’ll be there, and I will sing, but I don’t know if I’m going to sing on a diving board.”

The day arrived, and it was great. All those people came, and we had food for every­one. At Mr. Von Runkle’s house, Frank sang on a regular little stage. Dean Martin got up there with him. At Janet’s house, Frank climbed up on the diving board and sang. He handed the microphone down to Dean, and Dean said, “I’m not getting on that diving board.” Bobby Darin was there too. Frank sounded great. And until the day he died, he always said, “I had never in my life, at 11 o’clock in the morning, sung on a diving board, but that lady”—and if I were in the room, he would point at me—“that lady right there had me do it. That crazy lady.”

The next morning, the bricklayers were there at 7 o’clock, and they put the wall back so beautifully. When they used new bricks, they made them look a little old so they matched the other bricks. They didn’t charge me. The work was their contribution to the fundraiser.

Janet and Tony invited Mr. Van Runkle to brunch at their house. He called and said, “Roz thank you very much. I had the loveliest time. I’m glad to know them, and we’ve agreed to be real neighbors.”