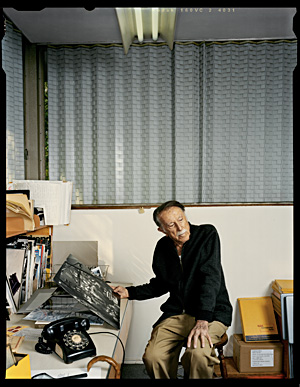 I’d like to tell you about the time that Julius Shulman made me pancakes. It was just about a year ago. Los Angeles’s most famous photographer, who at the time was 97 years old, had invited me over on a Monday morning for breakfast at his house. I pulled up the long driveway and knocked at the screen door. No answer. I opened it. “Julius? Are you here?” “In the kitchen,” came his voice, more gentle than usual. I walked in, down the entryway lined with his most iconic images of Los Angeles architecture, to find him standing at the stove, balancing on his walker with one hand and wielding a spatula with the other. He gestured for me to sit down at the lemon yellow Formica kitchen table, beneath a wall filled with a huge snapshot mosaic of his family and friends. He moved the pad of butter around the skillet to allow it to melt, then joined me in the banquette. “I want to ask you about something,” he said deliberately, taking a pause. “When did you become conscious of what you were doing?”

We had one of many thought-provoking conversations that we’ve had over the years. He told me we were both communicators. Right, I said, if only I could be 1/1000th as effective—or financially successful—at it as you. We talked about stories he had read in the paper that morning—he would scribble notes in the margins—and of our mutual fondness for columnist Steve Lopez. He rose to tend to the meal. A pot of coffee brewed in a 1960s glass Chemex on the stove, and he began giving me instructions on proper campfire cooking techniques. He placed bacon strips from Costco on paper towels, leaving them in the microwave an extra 15 seconds for crispness. I didn’t have the heart to tell him that I’ve never had a taste for coffee, I don’t eat pork, and I rarely eat wheat. Once the meal was prepared, we moved to the screened-in patio, surrounded by birds singing in the trees and succulents that had long outgrown their pots. Would I like seconds? he asked. Of course, I said.

When I heard that Julius Shulman died on the evening of July 15, 2009, the first place my mind went to was not the 8,000 projects he had photographed over his lifetime but those pancakes. Shulman was notoriously cantankerous and opinionated and demanding—three traits I wrote about in the profile Julius Shulman in 36 Exposures, which ran in our January 2009 issue. Over that breakfast he was anything but—he liked his mornings to be quiet, contemplative, and that day he wanted to do nothing more than make breakfast and conversation with a guest. He loved guests, invited or not. “Hello, we have just come from Germany,” strangers would say, standing at the doorway in socks and sandals, squinting through the screen. “We would like to see your house.” He had commissioned the Greek architect Raphael Soriano to design the home, completed in 1950, and it was all I-beams and flat roofs, a two-acre jungle in the midst of Laurel Canyon. Last year, when I asked his daughter, Judy, what would become of the home once her father was no longer there, she told me that she hoped it would stay in the family or be taken over by an institution like the Getty as a residence, a living lab. “I would hate,” Judy told me, “to see a gate at the end of the driveway.” So would I.

Many visitors over the years have toted along a bottle of single-malt Scotch as an offering, and it had long been Shulman’s hope to break them open at a tasting party. Once at a dinner years ago he suggested the Ides of March as a good date for a shindig, so a month after my story came out I said I’d host such a party at my house. It would be exactly four months later that he’d pass away, having spent his final weeks in his living room, looking out at the plants, listening to the birds, and still signing books. “A charmed life,” Judy told me, “right up to the end.” He had provided the guest list to the “Ides of March Julius Shulman Scotch-Tasting Bacchanal” and he basked in the gallery owners, architects, preservationists, and admirers who attended. He didn’t make a public speech at the occasion—the first time I could ever remember him not making a public speech at an occasion, which I took as a bad sign—but he did ask everyone to pause for a moment during the tasting. “Look at the bottles on this table, the way the sun is coming through the window and lighting them,” he said. “Beautiful, just beautiful.” It was.