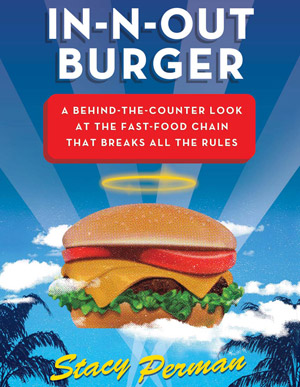 When I wrote Fat Burgers for this magazine five years ago, I explored the unique place that In-N-Out Burger occupied in the hearts and stomachs of millions. The chain began alongside a slew of small hamburger stands that sprang up in sun-drenched postwar Southern California. Sixty years later In-N-Out had evolved into a cult phenomenon. It had the power to turn everyone from celebrities to concrete pourers misty-eyed at the mere thought of a Double-Double. And yet, despite its undeniable iconic status, like many I realized that virtually little was known about the place or the Snyder family that founded it.

Besides the fact that the chain made really good burgers, it didn’t take long to discover that In-N-Out stood apart. And here’s why: it didn’t sacrifice quality for profits; it refused to franchise or go public. It hardly advertised and yet it printed bible passages on its packaging. The chain’s menu had barely changed since Harry Truman was president. Moreover, it was a family-owned business with a complicated family behind it.

That was just the beginning.

After the article ran, I moved on, but In-N-Out Burger stayed with me. It was the proverbial American success story that helped to inform the cultural narrative of California—and it was wrapped up in a family saga. There were cars, hamburgers, sibling rivalry, tragedy, and a single heiress set to inherit hundreds of millions—not to mention the entire In-N-Out Burger legacy.

As I knocked around the idea of a book in my head, fresh details and drama materialized. A nasty lawsuit alleging fraud, power grabs, and corporate coups erupted. In-N-Out Burger’s founding matriarch Esther Snyder died. A new round of speculation and questions concerning the beloved chain emerged.

I returned to the story where In-N-Out Burger began: Baldwin Park. With the primary members of the family long gone and the company maintaining a stony silence I had to dig deep and reach far. It was a challenge. I found myself combing through thousands of pages of legal documents, sleuthing in historical archives, digging up oral histories, going through books of yellowed archived newspaper clippings, and other items, while examining its business mechanics.

I had to piece together a story that began long ago and had roots in Illinois, Seattle, Santa Monica, and even Amsterdam. I found people who were children when the first In-N-Out Burger opened in 1948 and could still recall lining up for burgers.  I traveled between New York, California and Nevada on the trail of those who knew, worked with or were associated with the Snyders and In-N-Out over the years. I spoke to hamburger/fast-food pioneers including the Apple Pan’s Martha Gamble and Carl’s Jr. founder Carl Karcher. I interviewed nearly 100 individuals (not a few preferred to remain unnamed).

For the sake of research I began eating hamburgers again more than a decade after I had abandoned beef (weaning myself slowly off of my favorite secret menu item: a Grilled Cheese Animal Style).

Interestingly, as I finished the book, the economy began to crater. Wall Street collapsed, banks were on the brink, and the once dominant auto industry was asking Congress for a bailout. As one hallowed American symbol after another fell, In-N-Out Burger continued to stand steady. Its simple philosophy seemed steeped in another era, one that people are now longing to reclaim. Through all of the country’s gyrations in pop culture, greed, and even its own internal turmoil, In-N-Out Burger proves that you can stand for something and be successful. That is the American way.