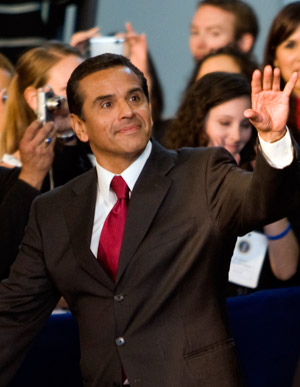 On CNN Monday, Los Angeles Mayor Antonio Villaraigosa told Wolf Blitzer that he will not run for governor in 2010, citing two major reasons that should have led him to have made the same decision some months ago—city in crisis, and a commitment to the citizens who re-elected him in February. Villaraigosa gave short shrift to other late-breaking factors that might have influenced his decision: a raft of unfavorable press; a recent Times poll finding 48 percent of Angelenos disapprove of his gubernatorial ambitions; a 2009-2010 city budget abloom with personnel layoffs and program cuts. Then there’s that new mayoral romance with yet another newscaster, KTLA correspondent and former Miss America Lu Parker. Read my open letter to Villaraigosa in our June cover story, urging him, among other things, to stay put and serve out his second term at city hall.