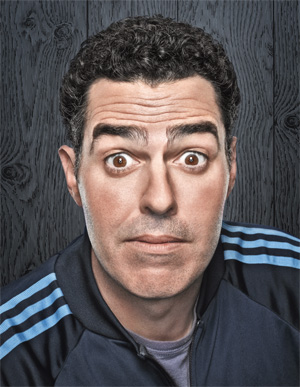 By the time The Adam Carolla Show was cancelled late last month, I no longer listened daily. But I was reassured to know that the Ace Man—a nickname Carolla acquired in his teens—was cracking wise on KLSX from 6 a.m. till 10 a.m. Whenever NPR’s Morning Edition threatened to overwhelm me with economic doom and gloom I turned the dial to 97.1. Driving to work just a few weeks ago, I had to pull off the road because a Carolla riff on boxer Evander Holyfield’s inability to pronounce his own name rendered me a danger to fellow motorists. To hear the ex-heavyweight champ repeatedly intone “Ebander” and then to hear Carolla mock him may not have been high humor but it was pointedly silly. The Ace Man was always that and often more. Which is why I took it hard when on February 20 KLSX changed formats from all talk to Top 40, bringing the laughter to an end.

I spent much of the summer of 2007 hanging out with Carolla while researching Inside the Revved-Up, Pissed-Off Brain of Adam Carolla. I came to him late. As early as 1994 listeners to KROQ’s Kevin and Bean fell for a recurring Carolla character named Mr. Birchum, a xenophobic junior high shop instructor. A couple years later, the Ace Man picked up more devotees when he started co-hosting Loveline on both radio and TV. In 1999 Carolla and his pal Jimmy Kimmel debuted The Man Show, an all-out assault on political correctness, on Comedy Central.

For me, Carolla was the guy who replaced Howard Stern on KLSX in 2006, and from the start I was hooked. The Ace Man’s humor derives from his honesty. He’s compulsively truthful about himself and the world. From his first shows, in which he made his father the butt of jokes, through an interim period during which former Partridge Family member Danny Bonaduce served as sidekick/punching bag, Carolla laid waste to hypocrisy. He was, however, rarely gratuitous. As his repartee with sidekick/newswoman Teresa Strasser revealed, he could even be courtly. Almost.

I don’t worry for Carolla. The week after he lost his job he began pod-casting a nightly version of his show that has become the most downloaded program on iTunes. Moreover CBS TV has purchased the pilot Ace in the Hole, starring Carolla as a driving instructor. Yet while Carolla will be OK, I’m not sure about L.A.’s morning commuters. Our comedic escape valve is gone. I predict an up-tick in road rage.