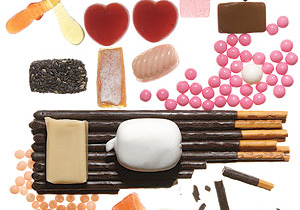 For this month’s Asian Food package, we showcased 20 unusual candies—everything from Botan rice candy to Pocky sticks and all sorts of gummy, fizzy, and fruity sweets. But getting to those 20 resulted in more than a few cavities.

Being the only non-Asian in the dozens of markets I researched for this issue, I got used to the curious glances. But nothing compares to rolling up to the cashier day after day with a shopping cart full of candy. Only candy.

In about a month I rounded up close to 80 pounds of candies from Thai, Japanese, Chinese, Filipino, Cambodian, and Korean stores from Little Saigon to the San Gabriel Valley. The criteria were simple: all candy had to be individually wrapped and they had to be actual candy. Pickled fruits like plums and mangos—popular treats in many cultures—wouldn’t cut it.

When it became a struggle to put my feet down due to the hundred-or-so bags of candy under my desk, it was time for the taste-off. After enough of these projects, I’ve learned that no matter how good it sounds in theory to consume, say, 22 pies in one day by yourself, or eight milkshakes, or six meatball subs (OK, that still sounds pretty good)—it isn’t. Lucky for me, our crack editorial team is always up for the challenge. And as if a friggin’ candy tasting party wasn’t enough of a draw, I also offered a special prize (which turned out to be more candy) to anyone daring enough to eat the Durian-flavored chew, made from the foul smelling fruit.

The goal was to figure out what lurked behind all that cool sparkly packaging and select the best 25 candies for the issue. Once the sweets were spread out along the conference room table, the tasting began. Quick favorites were the black sesame candy from China—subtle and smoky—and the spicy ginger candy from Indonesia. More divisive were the purple ube-flavored mochi (I loved it!) and the gooey tamarind chews (yech). A few of us didn’t realize the so-called soda “candy” was actually gum until we swallowed a handful. All of us felt sick for the rest of the day.