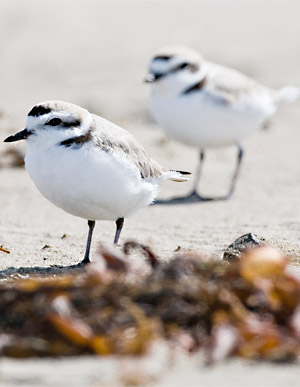 Most beachgoers in Los Angeles County are unaware of an avian drama unfolding in their midst. At the heart of the crisis is the western snowy plover, a small, sand-colored bird that relies on its color to conceal it from predators. It will often sit in footprints and tire tracks, becoming nearly invisible to beach-goers (and beach drivers). Plovers spend much of their time foraging amid piles of washed-up kelp, eating the small invertebrates that help to decompose the seaweed. They nest from March to September, placing their eggs directly on the sand in shallow scrapes smaller than human footprints. Their eggs and chicks are also well-camouflaged, easily blending in with their sandy surroundings.

Western snowy plovers once nested on beaches throughout Los Angeles County, but removal of their food source by frequent beach grooming and disturbance from development and recreation greatly affected their ability to keep nesting in these areas. Though L.A. beaches are still important wintering grounds, there have been no recorded nests in the county since the late 1940s. Plovers have faced similar challenges along other parts of the California coast, and today the Pacific Coast population is listed as a federally threatened species.

There are several simple things beach-goers can do to help plovers. To prevent attracting potential predators to the beach, always throw trash into a designated bin. Try walking or jogging along the wet sand, since plovers most often use areas just above the wet portion. For more information on how to get involved, visit Los Angeles Audubon online.