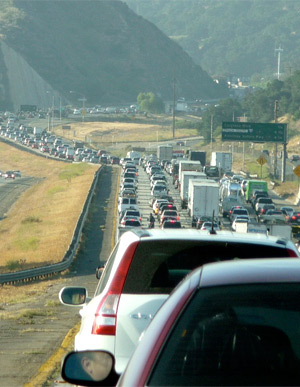 In 2001 traffic was the same obvious and exasperating fact of L.A. life that it is today. (Ok, maybe not quite the same.) Yet the more we considered the subject for the magazine, the more a mystery it became. Barring accidents, why was one commute a breeze on Wednesday, and a crawl on Thursday? Why did the creation of a new freeway lane offer zero relief for congestion? Did physical laws exist that could explain traffic flow, just as gravity explains river flow? What we found was that CalTrans District 7, some 6,000 square miles of roadway all of us drive, has become a laboratory for traffic engineers. Tens of thousands of sensors embedded in our freeways generate traffic loads of data every minute, streaming numbers that are studied by engineers attempting to understand what L.A.’s freeways are telling the world about the future of congestion. And what were the numbers saying in 2001? The same thing they are today: Everything we know about traffic is wrong.