Home Uncategorized Back Story: A Shot In The Dark 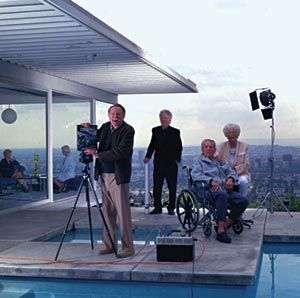 Julius Shulman’s photograph of Case Study House No. 22, also known as the Stahl House, has captivated all of us since it was first published in 1960. Those two young ladies in their white party dresses, those twinkling lights, that glass-walled house floating above it all—it must have seemed like a scene from a sci-fi movie back then, the vision of the future one in which we all could drift across the city in our own personal spaceships, gimlets in hand. Nearly 50 years later, it still holds that promise. I always found the photograph equal parts ethereal and mysterious. Who were those lucky ladies, and what became of them? In 2001, I set out to track them down.

I knew Shulman—as a magazine editor, I have run his photographs in publications—and naturally approached him first, but he didn’t recall names and just remembered them as two models who had come up to the house that night, as did the home’s architect, Pierre Koenig. After doing a little hunting, I found someone who said they had met a man once who said his mom was one of the models. Her name was Cynthia Tindle. I spoke with Tindle, who was indeed one of the models, and she began to unfurl the story and provided the name of the other woman in the photo, a schoolfriend of hers named Ann whom she hadn’t seen in 40 years, and Ann’s ex-husband, Jim Jennings. As a student of the home’s architect, Koenig, Jim had taken Ann up to the house that night, accompanied by a friend named Don and by Cynthia. I had to find Jim, and left several messages for anyone with his name across Southern California (I wonder how peculiar I must have sounded to the wrong Jims). I did find the right one, and Jim pointed me to Ann, who was now a teacher at the University of Washington, and to Don, who was now an architect in Sierra Madre. As the pieces began to fall into place, I decided that a reunion was in order.

The home’s owners, Buck and Carlotta Stahl, had never met the girls and were more than willing to host a reunion. Julius Shulman and his collaborator at the time, David Glomb, agreed to photograph a restaging of the shot. Pierre Koenig joined in and provided crucial background information, as did Leland Lee, Shulman’s assistant in 1960 whom my colleague, Chris Nichols, had found.

The magazine flew Ann in from Washington for the reunion, and I picked her up at the airport. I recognized her the moment she stepped off the Southwest flight. When we all convened at the Stahl House and person after person walked through the door—well, suffice to say many tears were shed. The Stahls were elated. The “two ladies” reconnected like teenagers. Shulman hadn’t seen Lee in eons and I had forgot to tell him he was coming, so that was fun—it’s rare to catch Julius Shulman offguard. What had transpired 40 years prior—as you’ll read in the story—was something that had become an accidentally momentous occasion in each of their lives. What happened that afternoon in 2001 was one of the most exciting moments in mine.

Pierre Koenig died in 2004, and Buck Stahl a few years later. Carlotta and her children still own the famous home she and her husband commissioned so many years ago, and it remains a busy filming site. Each time it pops up in a high-fashion print campaign or on a television commercial, I feel like I’m saying “Hi” to an old friend.