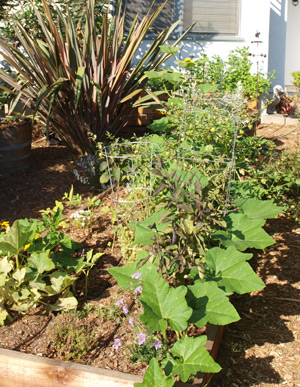 Those first few weeks after installing my frontyard vegetable garden, I was aware of every inch of growth: that the Japanese eggplants had developed little purple nodules, that the spinach was reaching tentatively toward the lettuces, that the cucumber and scallop squashes were finally bearing fruit, that the zucchetta was making slow progress up the trellis while sending a separate tendril toward the tomatillos, which were growing the most enthusiastically of all. Then I went to Hawaii for a week, trusting the drip irrigation system to care for the plants in my absence.

What a difference a week makes! I knew that the weather had been a heavy marine layer off and on, with some warming, but nothing to send people scurrying to the beach. The veggies must have loved it: The zucchetta had bounded past the cucumbers and was now almost as long as the 12-foot bed, with several of the gourd-shaped squash approaching harvest length. The scallop squash’s tiny offshoots had passed softball size, with spectacular orange blossoms heralding more to come. The eggplant were as long as butter knives, and the tomatillos were so prolific that I entertained thoughts of selling them at market. But the spinach was the knockout. It had overwhelmed several of the lettuces and was crawling up the dining room wall. This growth spurt got me thinking that I needed to reprise the fabulous rice casserole that had melded the spinach with mint and oregano. It was going to be even easier now that I had added the two herbs to my overflowing garden, consigning them to their own redwood barrel. The gardener had found two of the brand-new containers on a trip to the dump, discarded without ever having been used.

I was also cheered to see that the lemongrass, which had been heavily harvested by a friend, was madly sending up replacement shoots. And the okra, which had been tender seedlings when I left, now had several pods showing. My one worry was the cauliflower, whose leaves were being nibbled on the outside as well as showing holes like a Swiss cheese’s. I called Tara Kolla, the urban farming guru who has been my mentor.

The cauliflower, she speculated, were being attacked on two fronts: by little green caterpillars whose larvae, like white specks, I would find under the leaves and should brush off, and by flea beetles that I could discourage by spraying the plants with water in which uncrushed garlic cloves had been steeped. She also suggested introducing dill, chives, or onions to the bed, in the hope that the aromas would drive away the pests. I could even “chop up some onions and throw them on the bed and really piss them off,” she counseled.

I then brought up my artichoke, which was infested with aphids and looking stressed about it. The artichoke was likely weakened by getting too much water, and now that the days were cooling off, I could go back to irrigating every other day. But I also had to rid the poor patient of the bugs. I could wipe off most of them with paper towels, then spray the leaves with eco-friendly dish soap highly diluted with water so as not to burn the leaves. I needed, finally, to sprinkle diatomaceous earth around the base of the barrel to drive away the ants, which were colonizing the aphids.

Our health concerns covered, Tara and I chatted about my next project: planting potatoes.  I love these little temples to carbohydrates and was curious if they would grow outside of the peat bogs of Ireland. Certainly, said Tara, suggesting I put some in now. I would have the best luck with organic potatoes from the farmers market, which I would store until they showed sprouts, then cut those sprouting “eyes” into two-inch pieces that would go right in the ground. She also volunteered to give me some of the bounty from her flower-growing operation—ranunculus and anemone corms, planted now so that I would have sprays of color by Easter. Those beauties were definitely worth a trip to her Silver Lake Farms.