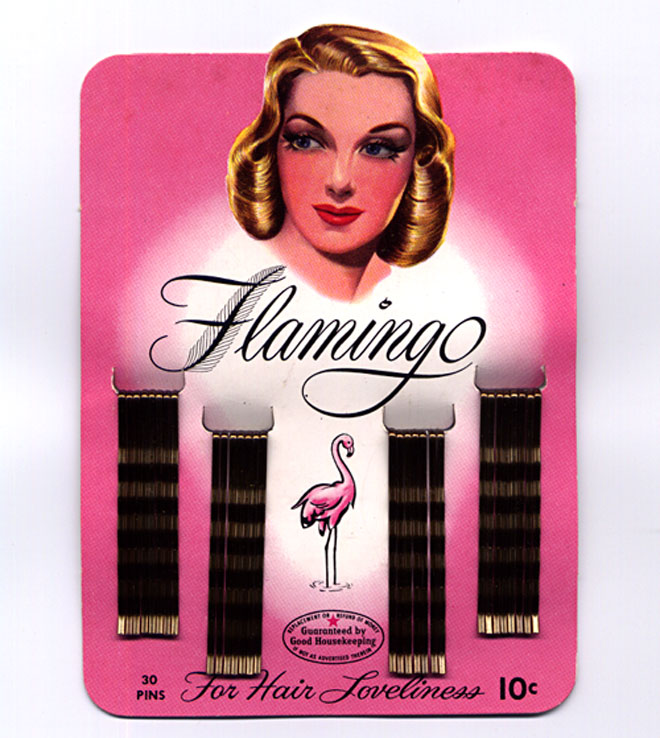 This Flamingo hairpin card was produced in 1947, and even if the date wasn’t printed on the back it would be easy to identify the era. The woman depicted on the front of the card is wearing her side-parted hair in face-framing rolls, a style that was de rigueur for most of the 1940s.

I was drawn to this Flamingo card when I saw it in an online auction about ten years ago because of its vibrant color, the undeniable ‘40s vibe, and its pristine condition. I bought it for about $10. All of the pieces in my collection suggest a story to me, and this hairpin card brings to mind the iconic Flamingo Hotel in Las Vegas, which opened on December 26, 1946.

The Flamingo, if you’re not familiar with its history, was Benjamin “Bugsy” Siegel’s project, financed by his associates in the New York mob. But the hotel wasn’t just business for Ben; it was a labor of love. He’d named the hotel after his mistress, Virginia Hill, whom he’d nicknamed Flamingo. A vivacious and headstrong redhead, Virginia was introduced to the mobster with movie star looks when she moved to L.A. in 1940, and in her, Ben found met his match. (When she discovered that Ben was lodging three other mistresses simultaneously at the Flamingo she confronted the one she hated most, the Countess Dorothy di Frasso, and nearly broke the woman’s jaw.)

By mid-1947 Siegel was in hot water with the mob. The Flamingo Hotel had opened to a handful of locals, not the crowd of wealthy Hollywood celebrities that Ben had promised. Ben knew that if the place didn’t show a profit, he would be expendable, so he fled Las Vegas and holed up in the house Virginia rented on Linden Drive in Beverly Hills.

On the night of June 20, 1947, Siegel was shot to death as he sat on a sofa in the living room reading a newspaper. Even though it was widely accepted that the mob had ordered the hit, no one was ever charged with the murder and the crime remains officially unsolved. Until her death in 1966, Virginia maintained publicly that she never knew anything about the mob, Ben Siegel’s criminal activities, or his murder.

Meanwhile, Morris Flamingo-Stephan, the 95-year-old manufacturer of Flamingo hairpins, is still in business today as a distributor of barber and beauty supplies. In fact, their logo remains virtually unchanged, except that the lovely blonde, along with her retro hairstyle, is long gone.