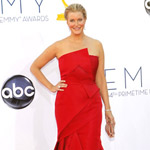 Predictions, may be sort of a long shot. I mean what are the odds Elisabeth Moss will show up in the exact Zuhair Murad gown I’ve picked out? Slim. So, really, what follows are my selections—what I would dress my favorite nominees in if I were styling them. Last year, I “predicted” what Lena Dunham, Michelle Dockery, Zooey Deschanel, and Claire Danes would wear. I was wrong on all fronts. However, I think they should have listened to me. We’ll see if I’m close this year. Outstanding Supporting Actress In A Drama Series for Breaking Bad

While at times I really disliked Gunn’s character Skyler White on AMC’s Breaking Bad, she always gave a convincing and powerful performance. There is no doubt that she’s an amazingly talented actress. Recently, we heard she lost a lot of weight after discovering she had a thyroid problem. Her doctor put it in check and she just shed pounds. We think she’ll want to show off her svelte figure in this Elie Saab column gown. The blue will set off her eyes, which we’ve so often seen tear filled during the series. (Gunn was on a panel earlier this year as part of our Breakfast Conversation series. Our editor in chief Mary Melton held a Q&A with the actress, you can read it here) Moss is a double threat, nominated for two Emmys, for her roles on Mad Men and Top of the Lake. If I was going to be any character on AMC’s Mad Men it would be Peggy Olsen. Moss plays the character with a mix of vulnerability and power and always a touch of girlish charm. We think big things are coming for Peggy Olsen next season. I also went on a little Netflix bender watching her on Sundance Channel’s Top of the Lake. She played a detective in New Zealand trying to track down a missing pregnant 12-year old girl. She was so engaging, I watched episode after episode. We think Moss would be stunning in this beaded Zuhair Murad couture gown with its plunging neckline and rose color. (I loved all of his dresses from the fall ’13 couture show, so did Kristen Stewart who was spotted front row). Outstanding Actress In A Drama Series for House of Cards

I devoured the groundbreaking Netflix series House of Cards. I even blogged about Wright’s character’s wardrobe in a post about power dressing on Capitol Hill. On the show Wright’s character Claire Underwood often wore white, but in real life Wright appears to favor darker colors on the red carpet and dresses with interesting necklines. I’m not sure if this Atelier Versace dress is too edgy, but I know she could pull it off and top best dressed lists.