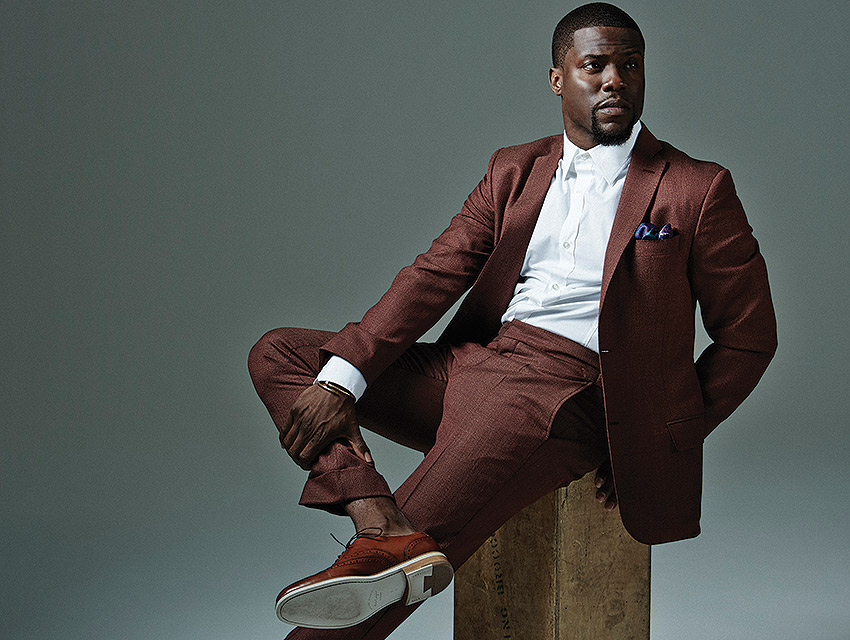 I lost sight of reality when I moved to L.A. I left Philadelphia for California when I was 23, and I spent my money on throwback jerseys—these older uniforms that everybody and their mom was buying. They were $300 to $400 a pop. I felt like I needed them all with a hat to match. I thought to myself, “This is not how it’s going to be forever, Kevin. You need to make adjustments and act accordingly.” So after dumping off a tremendous amount of money, it was time to smarten up—because if you don’t smarten up, this town will eat you alive. But if you look at pictures of me from back in the day, it’d be tough for you to find a picture where I didn’t have a throwback jersey on.

When I first got here, Judd Apatow cast me on a TV show called North Hollywood and asked me to move into my costar Jason Segel’s apartment. Judd said, “Kevin, instead of you staying in a hotel, I want you to stay with Jason.” We were up-and-coming actors, and the whole idea was for us to get to know each other before we started taping. So me and Jason were roommates for about three-and-a-half weeks. I had my own room—we definitely didn’t sleep in the same bed—but he did make me pancakes one day. It was pretty dope. It’s one of those “Remember when…?” stories that we have under our belts. Now we look back and we laugh, because that’s the type of thing you go through on your way up. It was refreshing.

For probably two years now I’ve had a driver because I got a DUI. I vowed never to put myself in that situation again, hence the “mobile office”: a Mercedes-Benz Sprinter. It seats 10 to 12 people, but I gutted it. I put in a big-screen TV, a limo divider, carpet, Wi-Fi, an Apple TV, a PS4—you name it, I have it. The seats are massage chairs that recline. I even sleep in there. But if you ask me how to get somewhere, I can’t tell you nothing. All I know is Ventura Boulevard and Sunset Boulevard. Once I was at the Burger King at Sunset and La Brea, and as I’m walking out, there’s a homeless guy staring at my car. I started talking trash to myself, like, “This guy is weird.” He came over, kicked my car, and then took off. It was scary. Not that I’m scared, because I’m not—I’m a thug—but I was a little scared.

I wish I had some cooler stories, like that I was climbing over the Hollywood sign and there was an ant that crawled up my pants and bit me on the butt or something. But I’m a homebody. Once in a while I go out with my lady. We go eat, I come back home, and then it’s dad time. My two kids are homebodies like me. I put a bunch of money into making our house cool for them: Electricity! Gas! Food! All the things we need to live. They have all these toys, too. We’ve got a theater in our house. I tell them, “Go in there and watch a movie. We’ve got a pool. Go jump in it. Go. There are things that you have here so you don’t have to bother me. That’s the reason Dad did all this stuff.”