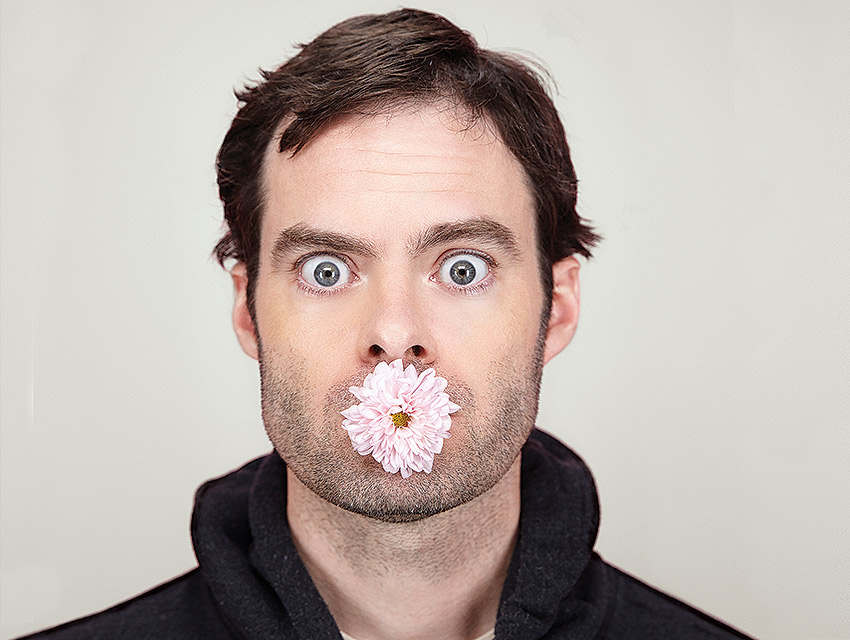 Do not go to Groundwork—that coffee shop across the street from Amoeba Music—ever. When I was living in New York for Saturday Night Live, I would visit L.A., and my friend, the director Nick Jasenovec, and I would see a double feature at the ArcLight, then go to Amoeba, then Groundwork to get a coffee. One time I went there, and this guy saw me and said, “Don’t leave.” Then he ran out. I looked at the barista like, “Hey, uh, let’s hurry up with that latte because he’s coming back—hopefully not with a gun.” Instead he came back carrying this giant Kinko’s box—it was heavy—and said, “I want you to read this.” I lifted off the top of the box and saw a 500-page manuscript with the title, SUPERBAD II. It wasn’t a script, it was a manuscript, so I said, “You sat down and wrote this, which is crazy. But the fact that you can sit down and write is really awesome. You should come up with your own idea and write that. I can’t accept this.” He didn’t seem like a crazy person; he just flipped out when he saw me. It happens in L.A. much more than in New York. It’s even better when someone says, “Hey, I have a script—can you give it to Kristen Wiig?”

I’m so the opposite of that. I won’t even go over and say hi to anybody. When I moved out here in 1999, I didn’t know anyone. Well, I knew Ben Stiller, but I was too afraid to ask him for help. I met him in Tulsa, where I grew up, when I was 17. He dated Jeanne Tripplehorn, and Jeanne Tripplehorn’s best friend was my best friend’s mom. I had Thanksgiving dinner with him, and he told me about this movie he was about to direct called Cable Guy. He was so sweet to me. But when I got to L.A., Nick was like, “You want to call Ben Stiller?” And I said, “No, I don’t want to do that. I don’t want to bother anybody.”

But I did get a job immediately as a production assistant on the lowest-of-the-low budget movies—terrible stuff that never got released. All of my friends were living in Los Feliz, but I needed to be on the Westside. Maybe it’s because I’m from Oklahoma, but I wanted to be in the vicinity of the beach, so I lived in student housing at UCLA—even though I wasn’t a student there—with my girlfriend at the time. The thing about Westwood is I could walk into the Village and would just act like I was a UCLA student. I had an old Camry and would have to park 20 minutes away from the apartment. It was actually an efficiency and had a bed, a sink, and a mini fridge. The bathroom and shower were outside in the hallway. It was awful. The furniture was bought at Target—it was all kid’s-playroom size, except for the desk with my computer on it. I kept the door open so I could look out onto the courtyard area. One day I was home watching The Sopranos on DVD—I didn’t have cable or anything—and there were movers coming in and out next door to me. Later my neighbors showed up, and they said, “Hey, our apartment just got robbed. Did you see anything?” I was like, “I thought they were movers. I’m so sorry. They didn’t look like robbers at all—they were very efficient.” My neighbors were like, “What the fuck is wrong with you?” That was bad.

My life is different since I moved back to L.A. from New York, mostly because I have a family and I don’t go out. For our anniversary my wife and I went to see Godzilla and then we ate at Barnyard Venice, and it was like, “We are crazy! The Kardashians have to keep up with us!” I still drive a Camry. Not the same one, a new one. It’s black and it’s filthy. I pulled in someplace, and this dude says, “Really? That’s what you’re driving? Didn’t SNL pay you better?” It doesn’t occur to me that I don’t drive a cool car until I hang out with Jon Hamm, who picks me up in what looks like a Transformer, and I think, “Oh, that’s what movie stars are driving. I guess I’m not a movie star.” I’m loving my dirty Camry.