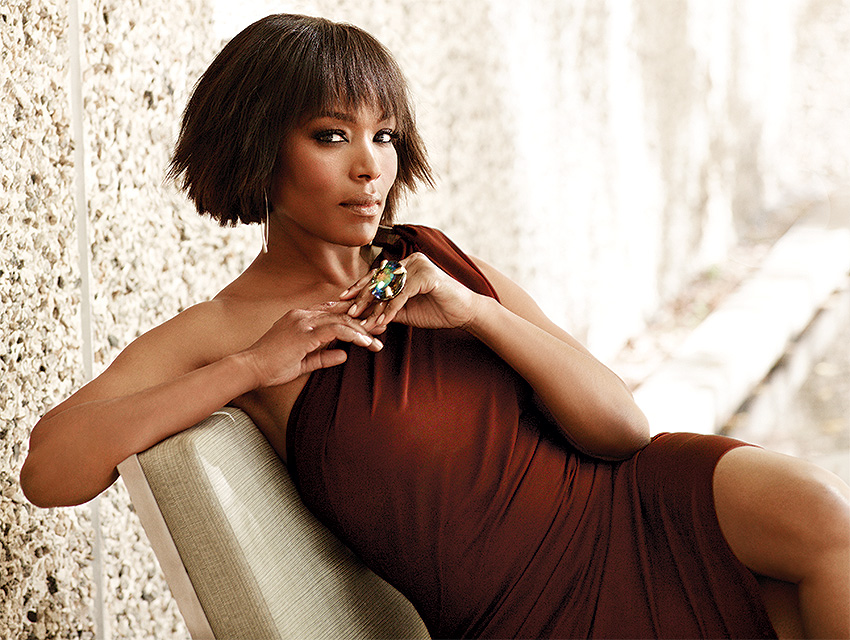 I’m from the projects in St. Petersburg, Florida. I’d never been farther west than Illinois—that one vacation with my mom and sister—so I only knew the eastern seaboard. I was living in New York, and the mantra for actors in the ’80s was “Go to L.A. for pilot season.” There was a mass exodus, with every actor you know going to L.A. to hit it big with a TV series or a movie. I was a little late in coming here—it was 1988. I knew a couple of people whose couches I could crash on for six months. That was my plan: test the waters, then come back to New York.

I arrived with my little suitcase full of summer dresses. I thought L.A. had to be like Florida, so I was like, “I got this!” But at night it was freezing, and I realized, “Oh, this desert thing.” I was ill prepared. I was sleeping on a girlfriend’s couch, and she said, “OK, you’ve got 30 days. We’re not turning this into two years.” She was smart—it’s called boundaries. But in those 30 days nothing happened. No work. So I ended up moving in with another friend, who didn’t have those boundaries. A year later and I’m working. Not a pilot or any films. It was all “Movie of the Week” back then, and I was in every one of them. I felt like an episodic-drama whore. And I was still on my friend Joy’s foldout couch. People were wondering if we were lesbians. Everybody had a comment like, “You’re working and you still live together? You’re hittin’ it, right?” I’m like, “No.” But I did wonder, “Why am I still here?” Because it was safe, we shared expenses, and I had company in this lonely place where you have to make your own family.

My time limit was up. I was supposed to go back to my rent-controlled apartment in Harlem—$230 a month for a one-bedroom on 158th Street. I didn’t want to lose it, so I called my great-uncle, who lived in New York, and said, “Uncle Charles, I’m supposed to come back to New York, but I’m working.” And he said, “Baby, don’t get off a winning horse.” That made so much sense to me. I’m winning, it’s happening. Keep riding, keep doing it. I said, “Got it, Unc—see ya!”

In 1992, I was cast in What’s Love Got to Do with It and had a bit of money. I couldn’t get a house, but I could afford a fancy apartment to call my own. I lived under a restless gentleman who shopped online all night long. He was 275 pounds. It was an uncarpeted floor. I was like, “My God, who is that up there?” He was a hoarder. I knocked on the door once, peeked into the apartment, and saw 19 golf sets—just stuff from floor to ceiling. Finally I couldn’t take it anymore, so I bought the place across the hall from him. I sold my old place within the same week, so I didn’t have to pay a double mortgage. After that, I hardly knew he was there.

People here are by and large nice, but there are times that are opportune and inopportune, and some people don’t care which it is. I have my church, the West Angeles. One time I was there and someone came up and said, “Hi, uh, can you read this script?” We don’t go for that here. I stay centered, grateful, and prayed up because I believe in a God who is bigger and badder than myself.

I Will Always Love You: The Whitney Houston Story
(2015)
Bassett makes her directorial debut with the late pop singer’s biopic for the Lifetime channel.

American Horror Story: Freak Show
(2014-2015)
Her role as a triple-breasted woman in F/X’s oddball miniseries is as potent as her voodoo priestess from last season.

What’s Love Got to Do With It
(1993)
After Bassett’s dazzling performance as Tina Turner, her film career was on a roll.