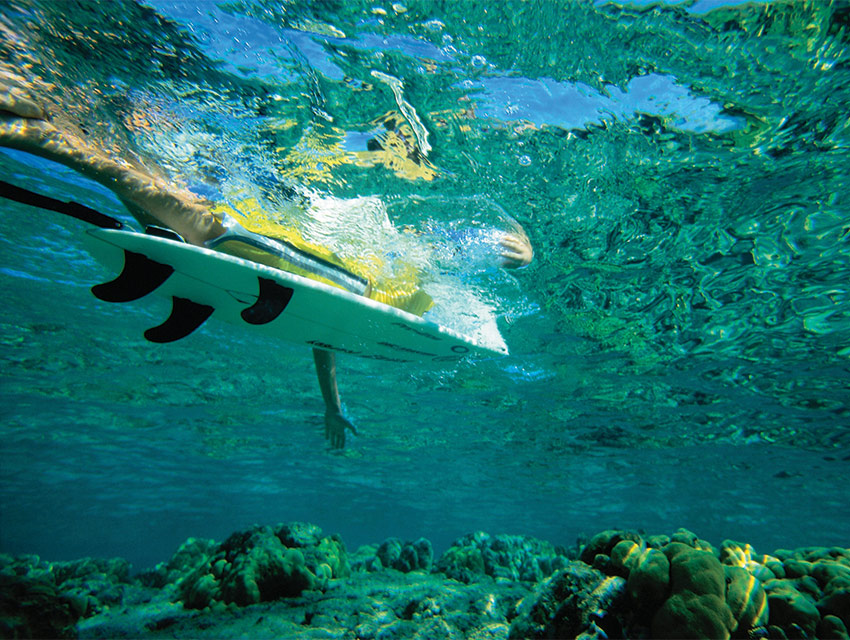 Hawai‘i isn’t so much a place surrounded by water as it is a place defined by water. The islands’ culture and history have been shaped by the Pacific ocean for millennia, resulting in a people who are as at home in the water as they are on land. You can see it when you watch surfers, sometimes as young as two or three years old, learning to ride the waves with their parents. You witness it when you see a canoe club practicing, their paddles cutting through azure water in perfect unison. In Hawai‘i, people partake in water sports for enjoyment, true, yet they also express something more elemental, more essential—a special relationship with the sea. Let’s look at some of the biggest moments in Hawai‘i’s illustrious history of aquatic pastimes.

The 15th Century
Native Hawaiians were already expert surfers, a sport they call he‘e nalu (wave sliding). Surfing in the Hawaiian islands may have started as early as 1,000 years ago, but chants dating as far back as the 15th century give us information about the early rituals, which included special prayers before surfing, as well as lively contests and even betting on the winners. Men, women, and children surfed, but the royal classes especially liked to show off, using surfing as a way to express their strength and skill. Unlike today’s polyurethane boards, ancient surfboards were made of koa or wiliwili wood. They weighed up to 175 pounds and were between 10 and 16 feet long. To keep the wood from getting too soggy in the water, the boards were treated with kukui nut or coconut oils.

This revered cultural experience has exploded into a global sports phenomenon. According to Fortune, 2.6 million Americans now surf at least once a year, and Hawai‘i remains the world’s surfing mecca. In the winter, top-notch surfers make their pilgrimages to the famed reef breaks of Jaws on Maui and Sunset and the Banzai Pipeline on O‘ahu to catch the season’s epic waves. If you’re on O‘ahu, definitely drive up to the North Shore to watch this churning, awe-inspiring action.

August 24, 1890
Duke Kahanamoku—the world’s most famous waterman—makes his entrance into the world. Half dolphin? Perhaps. His superhuman swimming and surfing skills, coupled with his warm personality, made him a beloved hero for the ages and a cherished icon representing the spirit of the Islands.

Kahanamoku first rose to international acclaim in freestyle swimming for Team USA, winning the territory of Hawai‘i’s first gold medal as well as a silver in the 1912 Stockholm Olympics. Breaking swimming records around the world, he also popularized surfing wherever he traveled, sharing the sport with his fans along the Atlantic Coast and in California and New Zealand. He racked up more gold and silver medals in the 1920 Antwerp and 1924 Paris Olympics, and a bronze at his last Olympics, 1932’s Los Angeles Olympics (on the water polo team).

When he wasn’t swimming his way to world records or riding monster waves on a 12-foot mahogany surfboard, he worked as a film and TV star and was elected sheriff of the City and County of Honolulu, a position he held 12 times. Oh, and he saved eight fishermen from drowning when a boat capsized. Kahanamoku was that rarest of things: a real-life superhero.

The awards and honors bestowed on him are too many to list here, but it’s worth mentioning that he was the first inductee into the Hawai‘i Sports Hall of Fame.

May 1908
The Outrigger Canoe Club is formed, with two grass shacks on Waikīkī Beach. The club is dedicated to fostering the traditional water sports of Hawai‘i: surfing and outrigger canoeing. Outrigger canoes had first arrived in the Islands around 300 AD, built for ocean voyaging and fishing. But perhaps as long as people have been paddling canoes, they have been racing them, too. The Outrigger Canoe Club soon began promoting regattas, leading to a revival of the sport. Today, there are at least 60 outrigger canoe clubs in the Islands, with full seasons and racing schedules.

If you’d like to try an outrigger canoe, many tour companies offer the option. It’s a splendid way to explore scenic spots like South Maui’s Turtle Town or Hanalei Bay on Kaua‘i and learn a little about Hawaiian history.

October 12, 1952
Three outrigger canoes, built from koa wood and each carrying six paddlers, depart from Moloka‘i’s west side. The teams are heading for O‘ahu—across open ocean and the notoriously tempestuous Ka‘iwi Channel. Nearly nine hours later, they reach Waikīkī, landing on the beach.

The paddlers’ journey was to become the first Moloka‘i Hoe (pronounced “ho-eh,” the Hawaiian word hoe means “to paddle”), the world’s premier outrigger canoe race. Each fall, more than 1,000 paddlers from all over the globe come to compete in this men’s world championship event. The 41-mile race is not only a test of physical strength, teamwork, and stamina, but also a way of honoring Hawai‘i’s seafaring culture. A women’s event, Na Wahine O Ke Kai (Women of the Sea) started in 1975.

The Moloka‘i Hoe is held each October. If you are in the Islands for it next year, you can watch at the finish line in Waikīkī. But if not, there’s live footage streaming at the event’s website (molokaihoe.com/liveTV.html).

July 7, 1971
The modern bodyboard is invented by Tom Morey on the Island of Hawai‘i. Morey had been a surfboard innovator, creating fin systems, and he started experimenting with a foam design for a bodyboard. He shaped a piece, sealed it with an iron and a sheet of the Honolulu Advertiser newspaper, which wound up transfer-printed onto the foam. He hit the waves at Honels, a surf break on Hawai‘i Island, with his strange new contraption and discovered it worked really well skimming across the waves. Millions of people have followed suit, playing on “boogie boards.” A great place to try boogie boarding is Kalapaki Beach, off a natural harbor near Līhuʻe on Kaua‘i’s south shore.

1984
Still in its infancy in the early 1980s, the sport of windsurfing is rocking in the perfect cradle: Ho‘okipa Beach Park on Maui’s North Shore. The conditions there are consistently ideal for windsurfing, with tradewinds blowing offshore at 15 to 25 knots. Early pioneers of the sport, like Mike Waltze, Alex Aguera, and Charlie Dale, came together, creating what was to become the capital of windsurfing, and in 1984, the Aloha Classic windsurfing contest was established.

Today, Ho‘okipa Beach Park remains the epicenter of the windsurfing world. If you want to watch world-class athletes in motion, this is the place to behold the action.

As for the competition itself, which includes pros and amateurs, the Aloha Classic’s contest window is October 28 to November 10. For more information, visit www.americanwindsurfingtour.com/events-2015/.

2003
Stand-up paddle surfing, also called SUP, is added to the Buffalo Big Board Surfing Classic contest, held at Mākaha on O‘ahu. A photo of surfing legend Laird Hamilton competing on a stand-up board (gasp!) is picked up in the media, immediately giving the new sport credibility.

There’s some dispute how new the sport actually is. Some say that native Hawaiians had been using paddles with their surfboards for centuries, and in the 1940s, Waikīkī beachboys wielded paddles with their boards. But the modern iteration really caught fire with the public and shows no signs of slowing in popularity. According to the Outdoor Industry Association, SUP had the most first-time participants of any outdoor sporting activity in the country.

The Winter of 2015-2016
If you have been wanting to try SUP, surfing, body boarding, or outrigger canoeing, what are you waiting for? Hawai‘i offers so many accessible ways to try these sports, from equipment rentals to private lessons to group outings. It’s time to dive in, and make your own Hawai‘i water history.