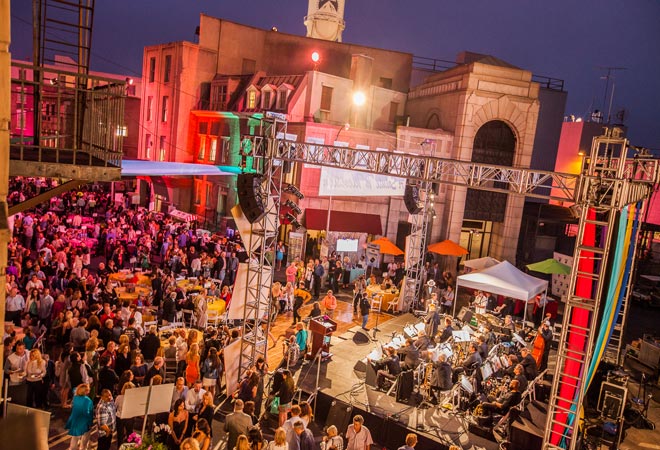 The Saturday night event showcased nearly 70 restaurants and caterers who provided a “taste” of their culinary specialties. The theme of the 2013 event, A SALUTE TO TELEVISION, honored TV pioneers Ava and Chuck Fries. The “New York” back lot at Paramount Pictures Studios was transformed into an energized block party where some 4,000 guests enjoyed food, drinks, and entertainment on four different stages. Some of the performers who rocked the night included: Paul McDonald Big Band featuring Tom Nolan, Captain Sugarman and the Space Cadets, and D’City Sound featuring DJ Dwayne. Hollywood celebrities and classic film and television footage could be seen from all angles of the party. Guests also enjoyed interactive activities like games and photo booths, a live auction featuring vacation packages with airfare from American Airlines, and a silent auction with everything from wine & dinner packages to spa and beauty treatments.

Los Angeles magazine, the media partner for 8 years running, outfitted the Best of LA® street with casino style gaming and cocktails sponsored by TANQUERAY®, the all-new Cadillac ATS, 2014 CTS and ELR, body assessments and massages from Equinox, a Vdara photo booth, a Stella Artois Beer Garden, artisan coffee and tea from Grand Avenue Coffee and samples from Clif and Luna bar. With the support of these sponsors, Los Angeles magazine donated $25,000 to Concern Foundation.