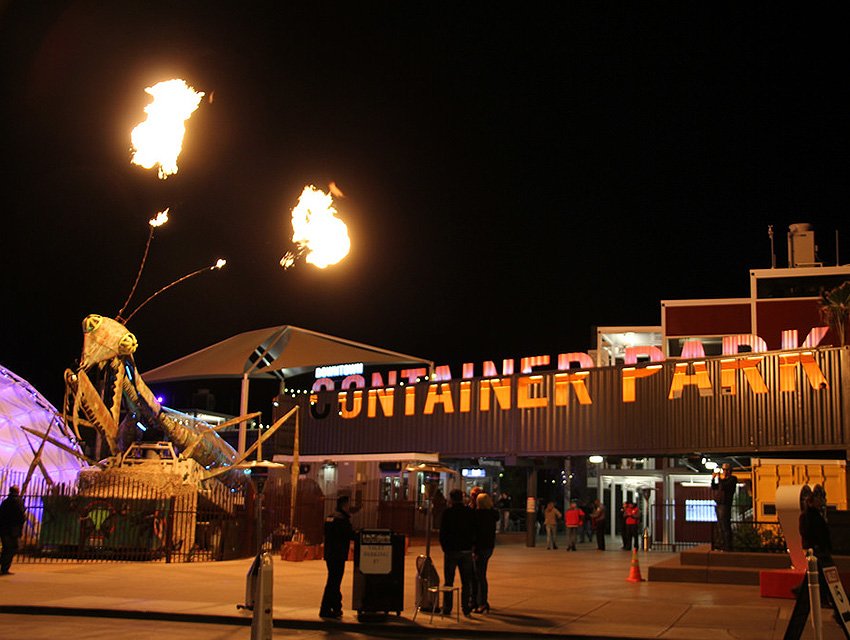 1. Container Park
Downtown cuts the ribbon on another newcomer this fall with a frisky mall constructed of steel shipping containers. Picking up on a new urbanism trend, it’s set to host casual cafés and chummy taverns, but lest anyone think they’re in Williamsburg, there’s also an Immersion Vortex Dome (casual laser shows, chummy potheads) and a 40-foot fire-spewing praying mantis in the works. » 7th & Fremont Sts.

3. Delano
Endless sunshine, gorgeous pool-scapes, sumptuous suites, B-celebs—THEhotel was hot stuff when it opened in 2003. Now Miami’s cushy Delano is positioned to take over the casino-free Mandalay Bay property, part of the shift along the Strip toward something cooler. The revamp debuts in early 2014 with Philippe Starck-designed rooms plus renovated restaurants, bars, and a spa. » 3950 Las Vegas Blvd. South

4. Gansevoort Las Vegas
The John Wayne Suite at Bill’s Gamblin’ Hall & Saloon has been given the boot to make way for a down-to-the-studs renovation featuring “Parisian apartment-style” rooms (au revoir, Duke). An offshoot of the New York minichain of highbrow boutique hotels that started in the Meatpacking District, it’s set to open next year, along with a sprawling nightclub (pool included) from nocturnal impresario Victor Drai. » 3595 Las Vegas Blvd. South

5. Slotzilla
Ever wanted to live the life of a Vegas nickel while expanding your adrenal glands? For $30 you can consider your wish granted: Come summer, this 11-story theme attraction, modeled after a one-armed bandit, will be ready to swallow you whole before spewing you 1,700 feet along a zip line that is suspended below the downtown light canopy otherwise known as the Fremont Street Experience. “I, Cha-Ching” T-shirt concession TBA. » 425 Fremont St.

6. The LINQ
While Vegas has mostly ditched the amusement park gambit, Caesars doubles down with a $550 million entertainment zone. Anchoring it is a massive Ferris wheel with cabins that can hold up to 40 people (ideal for that Harlem shake video). Guided by Grove developer Rick Caruso, the project debuts in December near the Flamingo as well as the Quad (the old Imperial Palace) and Gansevoort hotels. » Las Vegas Blvd. South & Caesars Palace Dr.